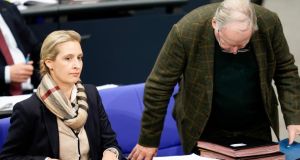 The first time Berlin politician Andreas Wild wore a cornflower on his lapel in public it was, he said, to demonstrate his “links to the fatherland”, the vanished state of Prussia and its last leader, Kaiser Wilhelm II.

Wild recently appeared in the Berlin state parliament, again wearing a cornflower, this time as a “symbol of the romantic era”. Parliament president Ralf Wieland ordered him to remove it, saying “such a symbol contradicts the dignity” of the chamber.

Under protest, Wild, already facing an internal-party investigation for links to the far-right scene, left the chamber and returned in his shirtsleeves.

At the same time in nearby Potsdam, capital of the neighbouring state of Brandenburg, senior AfD politician Steffen Königer announced his resignation from the party.

“In many regional parties, the conservatives have lost – once and for all – the battle against the destructive forces in the party,” said Königer, a member of the AfD national committee.

In its five-year history, the AfD has morphed from European Union bailout critics to a far-right populist party that is anti-immigrant and anti-EU with strong xenophobic tendencies. A bitter battle between conservative and far-right camps has seen it shed founding members, three senior leaders and dozens of regional officials.

Watching developments closely are Germany’s 16 state governments. Many of them have now compiled dossiers demanding the AfD be placed under state surveillance by Germany’s domestic intelligence agency, the Federal Office for the Protection of the Constitution (BfV).

Particularly thick is the dossier from eastern Saxony, facing a state election next year, where polls put the AfD in second place with 24 per cent support.

Saxony’s submissions include lists of local AfD politicians’ links to extremist groups such as the anti-Islam Pegida and organisers of a far-right riot in the eastern city of Chemnitz last August.

But two German dictatorships in the 20th century mean high hurdles exist before such surveillance is permitted.

The AfD sits in all 16 state parliaments and is the Bundestag’s largest opposition party, so the BfV cannot risk being seen to take orders from politicians anxious to tame a disagreeable opponent.

That was the accusation in the 1990s when the agency began monitoring the successor party to East Germany’s ruling communists.

Placing a watch on a party as a whole inhibited the democratic process, the court ruled, because “the resulting stigma could inhibit voters making contact”.

There are no shortage of provocative AfD politicians. One described the Nazi era as “bird shit” in an otherwise glorious millennium of German history; another attacked postwar Germany’s “guilt cult” and described Berlin’s Holocaust memorial ambiguously as a “monument to shame”.

The remarks achieved their purpose – political controversy and free publicity – but are taboo-breaking remarks an “aggressive” threat to the democratic order? Charged with answering that question soon: a 17-head BfV committee, comprising political scientists and lawyers.

For remaining AfD moderates, the rising fear of surveillance – and the prospect of legal infiltration by paid BfV informers – will rein in their party.

A report they commissioned on how to avoid surveillance recommended that politicians avoid charged, Nazi-era terminology and all remarks that “defame or denigrate foreigners/immigrants/refugees/Muslims”.

But disillusioned, departing AfD moderates doubt that policing language can halt the party’s radical slide. In a last-ditch attempt to avoid surveillance, AfD moderates want to cut ties to its “Young Alternative” youth wing. In recent months, its members have called for the “public execution” of its critics and to halt animal testing “by using refugees instead”.