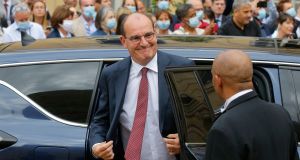 The first cabinet meeting of a new French government that leans heavily to the right will take place at the Élysée Palace on Tuesday.

The cabinet announced late on Monday has a share of leftists and environmentalists, and women outnumber men by 17 to 15.

President Emmanuel Macron’s main goal in changing prime ministers and reshuffling his cabinet appears to have been to unite his own camp and further fragment the opposition in the run-up to the 2022 presidential election.

Despite the fact that the two highest-ranked ministers are a socialist and a green, the new government leans so much to the right that commentators say Macron’s “en même temps” (at the same time) slogan has become meaningless. The president has long claimed to be simultaneously of the left and right, or above partisan divisions.

Transplants from the conservative party Les Républicains, who are close to the former president Nicolas Sarkozy, hold the balance of power in the new government.

Prime minister Jean Castex worked in the Élysée during the presidency of Nicolas Sarkozy. Bruno Le Maire, who also came from LR, retains the portfolio of minister for the economy and finance. The word “recovery” has been added to his title, and Mr Le Maire has been promoted to fourth-ranking cabinet minister.

Gérald Darmanin, a young, former LR politician with ties to Sarkozy, was budget minister in the preceding government. Mr Darmanin survived a lawsuit over an alleged sexual assault and has been rewarded for his modernisation of the French tax system by being appointed minister for the interior, one of the most powerful posts in the French government.

Roselyne Bachelot, who served as Sarkozy’s health minister, has been appointed minister for culture. In 2017, Ms Bachelot swore she had given up politics forever. She was ridiculed for having purchased more than a billion surgical face masks during the swine flu scare in 2009, but was rehabilitated during the Covid-19 crisis when she was a strong presence in media.

Darmanin replaces the former Socialist Christophe Castaner. Mr Castaner was a Macron loyalist from the beginning, but he created controversy during the gilets jaunes revolt for appearing to defend police brutality. More recently, police turned against Mr Castaner when he said that all police and gendarmes suspected of racial discrimination would be immediately suspended.

Two other ministers who had become a drag on Macron’s administration, labour minister Muriel Pénicaud and government spokeswoman Sibeth Ndiaye, were also sacked. Ms Pénicaud was mocked for sounding incoherent in a radio interview. The Élysée said Ms Ndiaye asked to leave the government. A naturalised citizen from Senegal, Ms Ndiaye was subjected to fierce criticism on social media. She has been replaced by Gabriel Attal, the former junior minister for youth.

Jean-Yves Le Drian, a lifelong socialist from Brittany, the eldest member of the government and a friend of President Michael D Higgins, retains his post as foreign minister, and adds the portfolio of European affairs. Mr Macron dominates foreign policy to such an extent that Mr Le Drian has very low visibility. He was nonetheless ranked number one after Mr Castex, the prime minister.

Following the June 28th municipal elections in which the environmentalist party Europe Écologie Les Verts won several large cities, Mr Macron was compelled to make a strong gesture to EELV. He made the EELV politician Barbara Pompili minister for the environment, with second rank in cabinet. Ms Pompili was a junior minister under the previous president, François Hollande. Her appointment is seen as the principal prize for the left and environmentalists in the new government.

Eric Dupond-Moretti, a boisterous, colourful criminal lawyer who is famous for obtaining a large number of acquittals, was appointed minister of justice. Mr Dupond-Moretti represented Irishwoman Eroline O’Keeffe when she sued the French state – and won – for miscarriage of justice in the murder of her son Trevor.

The ministers for education, defence, decentralisation and health have remained in place.

The biggest difference between the previous prime minister, Edouard Philippe, and his replacement Mr Castex appears to be Mr Castex’s willingness to take on a leadership role in Mr Macron’s La République en Marche party, which Mr Philippe always shrank from doing.

“The most important thing is my relationship with the parliamentary majority,” Mr Castex told Le Journal de Dimanche at the weekend.