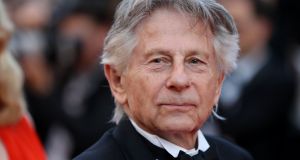 French-Polish director Roman Polanski: photographer Valentine Monnier has alleged in an interview with Le Parisien that he beat her up and raped her in 1975. Photograph: Valery Hache/AFP

For years, the French cinema industry and intelligentsia have smugly criticised what was seen as excessive moralising in the US over sexual harassment and in some cases allegations of rape. When the #MeToo movement started two years ago, Catherine Deneuve led the backlash, denouncing a “puritanical witch-hunt” and defending men’s “right to importune”.

French indulgence towards creative, powerful men in the arts who abuse women appears to be crumbling, as the result of fresh accusations against the Franco-Polish film director Roman Polanski.

On Monday night, ARP, the syndicate of French screenwriters, directors and producers, voted to suspend Polanski’s membership, 10 days after French photographer Valentine Monnier alleged in an interview with Le Parisien newspaper that Polanski beat her up and raped her in a ski chalet at Gstaad when she was 18, in 1975.

Polanski denied the accusation through his lawyer. Monnier has not pressed charges and the alleged offence has in any case passed the statute of limitations. Monnier said she came forward because Polanski’s aptly named film, J’Accuse, about the Dreyfus affair, was about to be released.

Monnier is the sixth woman to accuse Polanski of assault or rape. Five said they were attacked by him in the 1970s; one alleged abuse in 1983.

Polanski was charged and convicted in only one case. In March 1977, Samantha Geimer, then aged 13, accused the director of giving her drugs and alcohol before raping her during a photo shoot at Jack Nicholson’s villa in Hollywood.

As a result of a plea bargain, Polanski served only 42 days of a 90-day prison sentence. After he was released, the judge tried to reverse his decision and Polanski fled to Europe, where he has remained ever since. He was arrested in Switzerland and Poland, but both countries eventually refused to extradite him to the US.

In 2017, Geimer asked the US to drop charges against Polanski, saying that media coverage had been far more traumatic than Polanski’s abuse of her. “I forgave him many years ago,” she told British television. “I was a sexually active adolescent and I was not traumatised by sex the way everyone seemed to think I was.”

The US nonetheless refused to drop charges, and Pierre Jolivet, the president of the ARP, referred to the 1977 rape when he told a press conference on Monday night: “Forty years have passed since the first affair involving Roman Polanski . . . The crimes are still the same, but the way they are perceived has changed enormously . . . One can put one’s head in the sand and say the world hasn’t changed. We realise it has changed and that explains this decision.”

In 2010, British actor Charlotte Lewis held a press conference in Los Angeles to accuse Polanski of having sexually abused her in 1983 when she was 16. A scandal erupted at the Cannes film festival, and Polanski was defended by celebrities, including Woody Allen and the French intellectual Bernard-Henry Lévy.

Polanski’s film The Pianist, about a Holocaust survivor, won the Palme d’Or at Cannes in 2002, and three Oscars, including best director. Polanski was nonetheless expelled from the Motion Picture Academy last year, a few months after Marianne Barnard, an American artist, accused him of sexually assaulting her on a beach near Malibu during a photo shoot in 1975, when she was 10 years old.

For the first time, it appears that no one is willing to defend Polanski, now aged 86. “Genius is not a guarantee of impunity,” the French culture minister Franck Riester said last week when announcing new measures to combat sexual harassment in the cinema industry.

J’Accuse won the grand prize at the Venice Biennale in September. The press kit for its Paris release included an interview with Polanski, conducted by the philosopher Pascal Bruckner before Monnier made her rape accusation. “As a Jew pursued during the war, a filmmaker persecuted in Poland, will you survive today’s neo-feminist McCarthyism?” Bruckner asked.

Polanski replied, “Working, making a film like this one, helped me a great deal. Sometimes I find moments that I lived through myself. I see the same determination to deny the facts and condemn me for things I didn’t do.”

Though Polanski later said it would be silly to think he was comparing himself to Dreyfus, he has been accused of conflating #MeToo accusations with anti-Semitism.

At least five broadcasts promoting the film have been cancelled, including a prime-time television interview with its star, Jean Dujardin, and a radio interview with Polanski’s French wife, Emmanuelle Seigner, who also acted in J’Accuse.

Despite feminist calls for a boycott, J’Accuse led box-office earnings in France last weekend. Nearly 390,000 people went to see it in the five days following its November 13th release.