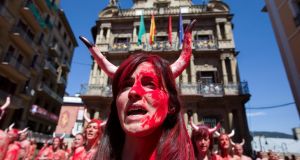 Protesters from animal rights organisation Peta in front of the town hall in Pamplona, Spain, on Wednesday. They were demonstrating against the treatment of fighting bulls in the city’s San Fermín festival, which begins on Thursday. Photograph: Jim Hollander/EPA

At the beginning of this week, as Pamplona’s annual running of the bulls festival approached, city hall employees could be seen applying a liquid to stretches of the city’s cobbled streets. The anti-slip substance helps prevent falls among both the running bulls and the humans they chase each morning during the week-long San Fermín festival. It is believed to have saved many runners from injury or even death in recent years.

But this year, a raft of other safety measures is being introduced – although not to protect the mainly male runners who hurtle through the streets alongside a group of bulls from one end of the city to a bullring at the other. A campaign is being implemented to stamp out the trend of sexual assaults against women which has tarnished the image of the festival.

Ahead of the festival’s Thursday opening, Pamplona mayor Joseba Asiron said the city’s authorities want to ensure that “women, who make up 50 per cent of our population, can walk the streets in the same conditions of safety and comfort as men do”.

Reports of sexual assaults at the festival have been rife in recent years. In 2016, a woman from Madrid who was about to get into her car to sleep was abducted and raped by a group of men. Five men are awaiting trial in relation to the attack.

Several other rapes and sexual assaults were reported to police during last year’s event, reflecting an apparently increasing trend.

The northern city swells from 200,000 inhabitants to around a million during the annual fiesta, which draws visitors from Spain and around the world. Once glorified by Ernest Hemingway as an event where a young man could test his courage, the festival’s hedonistic side has become increasingly apparent in recent years, as participants drink throughout the night in the town’s many bars.

One common sight during the festival is that of topless women being fondled in the middle of large crowds.

“The main problem with San Fermín is the huge number of people, the number of inhabitants multiplies enormously, and anything can happen,” the feminist group Lilithfeminista told The Irish Times. “It ranges from the harassment on the street that all women suffer, to comments, looks, being followed and being touched in bars and in the street – and even rape.”

The problem first came to prominence in 2008, when a student, Nagore Lafagge, was murdered during the festival. Since then her mother has campaigned for improved safety for women at San Fermín.

As part of the new campaign, Pamplona city hall has made available a multi-lingual phone app, AlertCops, which allows victims of crime to contact the emergency services with just three clicks. Users choose one of several crime categories – including sexual assault – and the app informs the police of the victim’s exact location.

Information and help points are also being laid on for potential victims and to prevent assaults. A video campaign is also under way, with men and women of different sexual orientations and nationalities speaking out against sexual violence at the festival.

The mayor believes that although assaults have been a problem, they do not fairly reflect what is essentially a wholesome festival for all the family. Asiron, of the Basque nationalist Bildu coalition, said his team was fighting against the “distorted image that has existed for some years of our fiesta in which there’s an idea that it’s all about bulls, alcohol and women”. He also said the police would try to clamp down on women going topless in the town.

The famous encierro, or run, takes place each morning, when the bulls are released from a pen. Each evening a bullfight is held involving animals that took part in the morning’s run.

The leftist Podemos and United Left parties are boycotting the bull-related activities on animal rights grounds.