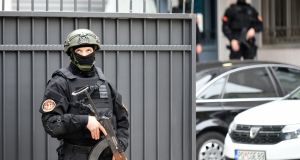 A police officer stands guard in front of the high court in Podgorica, Montenegro on Thursday. Photograph: Boris Pejovic/EPA

A court in Montenegro has convicted 13 people of involvement in a 2016 coup plot, including two of the country’s opposition leaders and two alleged Russian intelligence officers.

They were sentenced to up to 15 years in jail for planning to storm Montenegro’s parliament, kill its then prime minister Milo Djukanovic and install a pro-Moscow government to stop the country joining Nato.

The accused rejected the allegations as an elaborate fantasy dreamed up by Mr Djukanovic and his allies to retain power and boost their pro-western credentials, and the Kremlin has denied being part of any such conspiracy.

The two alleged officers of Russian military intelligence (GRU), who were named in court as Eduard Shishmakov and Vladimir Popov, were found guilty in absentia and sentenced to 15 and 12 years in prison respectively.

Prosecutors said the pair recruited Montenegrins and Serbs to stage the coup after parliamentary elections on October 16th, 2016, but it unravelled when a member of the group, Bratislav Dikic, was arrested the night before the election as he entered Montenegro from Serbia.

Mr Dikic, the former leader of a Serbian special police unit, said at the time that he was on his way to visit a monastery and was framed by police who planted evidence in his car. He was sentenced to eight years behind bars on Thursday.

Andrija Mandic and Milan Knezevic, leaders of the Democratic Front opposition alliance, each received five-year jail terms after what they called a political trial ordered by Mr Djukanovic, who has dominated Montenegro’s politics for three decades and is now its president.

“Whoever couldn’t see it before can see it now. Montenegro is the first country in the world to be owned by the mafia,” Nebojsa Medojevic, another Democratic Front leader, wrote on Facebook.

Montenegro became Nato’s 29th member in 2017, further strengthening the alliance’s position in the wider Mediterranean region and dealing a blow to Russia’s hopes of regaining influence in the Balkans.

Critics of the trial noted that prosecutors could not produce the alleged plotters’ weapons, and key witness Aleksandar Sindjelic recently went on Serbian television to contradict his testimony and deny that a coup had been planned.

Mr Sindjelic, a radical Serb nationalist who became a protected witness in the case, told the court that the Russians had recruited him and provided money for weapons and other equipment for the gang.

Surveillance photos taken in a Belgrade park showed Mr Sindjelic talking to Mr Shishmakov and Mr Popov and the two Russians sitting together on a bench.

Montenegrin officials say Mr Shishmakov served as Russia’s deputy military attache in Poland before being expelled for spying in 2014, and travelled to the Balkans with a Russian passport in the name of Eduard Shirokov.