Ireland’s coronavirus experience described as a ‘cautionary tale’ for policymakers 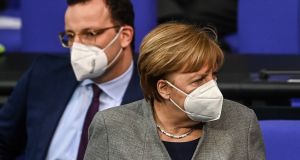 The German leader has told officials she was “extremely worried” about the steep increase in Irish infections and moved forward by a week a meeting with leaders of the 16 federal states – who have front-line responsibility for German health matters.

Dr Merkel is urging them to accept an even tighter lockdown involving restrictions not yet imposed widely in Germany, from curfews to reduced public transport capacity.

“We are not obsessed with Ireland but it is a cautionary tale for politically-responsible people,” said Steffen Seibert, the chancellor’s spokesman, to The Irish Times.

A week after Germany limited entry from Ireland to people with negative Covid-19 tests, officials close to Dr Merkel have been alarmed by infection numbers – and remarks chief medical officer Dr Tony Holohan made about the spread of virus mutations.

Though aware of other contributory factors to the spike, in particular Christmas season socialising, Berlin officials hope their pre-emptive action can avoid a repeat in Germany.

“Ireland went from an incidence rate of 40 to 1,000, you can only imagine the terrible effects that would have here even on our really strong health system,” said Mr Seibert.

Germany’s Bild tabloid informed its readers on Friday: “There’s one curve that, for days, has caused maximum nervousness in the chancellery: the daily new infections in Ireland.”

But it questioned the logic of Dr Helge Braun, the chancellor’s chief of staff and a medical doctor, who it said had linked the new mutations of the virus from the UK and South Africa.

WHO emergency co-ordinator Michael Ryan told the tabloid: “The new variant strains are not driving the spread . . . [but] because of rising socialisation and falling social distancing”.

Such remarks will complicate matters for state leaders, many of whom fear a backlash from restriction-weary voters. But leading medical professionals in Germany have urged politicians, regardless of the role of virus mutations, to learn from Ireland’s mistakes.

“A lockdown has to be worth the name, hard and consequential – in industrial and manufacturing sectors and the related commuting,” said Prof Ulrich Montgomery, president of the Standing Committee of European Doctors. “Above all, Ireland teaches this us we need a concept for getting out of a lockdown after a drop in incidence rates. Ease-up is more difficult than lockdown.”

Germany is in its second lockdown, with non-essential shops and services closed until at least the end of January. But Merkel officials concede that it may no longer be possible to avoid tougher measures imposed elsewhere – in particular a nationwide curfew.

“We don’t really know what lockdown is, but we are moving step-by-step in that direction,” said Mr Seibert. “Perhaps it would have been better to have done this before, but there you go.”

Ireland’s renewed struggle with Covid-19 – and the consequences for Germany – dominated news coverage on Friday.

“For a long time, it looked as if Ireland had corona under control,” noted Der Spiegel. “It took just three weeks for that to change fundamentally.”

Berlin’s Tagesspiegel asked: “How could this happen to Ireland?” One reader offered an answer: “An Irish colleague told me that, in Ireland, Christmas is holy, with drinking and partying like never before. Full shops and trains into the bargain, everyone went out. It’s their own fault.”

Other commenters were less dramatic: “Please look at the current numbers, dropping strongly for a week. Look at the facts and don’t immediately start spreading panic.”