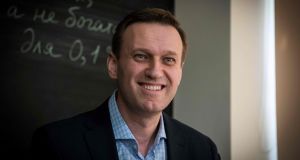 Friends and foes of Alexei Navalny plan to meet the Kremlin critic when he returns to Russia on Sunday, amid warnings that he could face immediate arrest, a lengthy prison sentence and further threats to his life.

Mr Navalny says he has bought a ticket on a Russian budget airline to fly home to Moscow from Berlin, to where he was evacuated for emergency treatment last August after being poisoned with a Novichok nerve agent while in Siberia.

The Bellingcat investigative group has since published compelling evidence that he was targeted by the Russian security service, and Mr Navalny duped one of its officers into divulging details of the poisoning and subsequent clean-up operation during a recorded phone call.

The Russian authorities have refused to investigate the near-fatal poisoning, however, while cranking up legal pressure on Mr Navalny and his anti-corruption foundation, which investigates officials and businessmen who appear to have accumulated huge wealth under the country’s president, Vladimir Putin.

Russian investigators launched a new case against Mr Navalny last month for allegedly defrauding his foundation, and the country’s prison service accused him of breaching the terms of a suspended sentence he received in 2014 by failing to report to them while he was recovering in Germany.

The prison service has now asked a Moscow court to convert the suspended sentence for fraud into real jail time, and warned that it could detain him immediately upon his arrival in Russia.

“Taking into account the facts of malicious violations . . . [the prison service] is obliged to take all actions to arrest the violator,” it said.

Followers of Zakhar Prilepin, a Russian nationalist writer, politician and former fighter in the war in eastern Ukraine, announced that they would also be waiting for Mr Navalny (44) at Moscow’s Vnukovo airport on Sunday evening.

The “Zakhar Prilepin guard” said it would hand Mr Navalny “a written warning, that if he tries to undermine the constitutional order, then [the guard] will demand that he be expelled from the Russian Federation or will expel him itself”.

Russian nationalist group Serb also plans to be waiting for Mr Navalny, who suffered a serious eye injury in 2017 when a chemical was thrown into his face by an alleged member of the organisation; Serb denied involvement in the incident.

Supporters of Mr Navalny are also expected to greet him, with 1,900 people indicating on Facebook that they would answer a call for support from his allies.

“Now Putin is hysterical and wants urgently to figure out how to put Alexei in jail”, organisers of the appeal wrote. “And it depends entirely on us whether he can do it.”

Vnukovo airport announced on Friday, that to prevent the spread of coronavirus and protect passengers, “mass events, including the organisation of media activities on the territory of the airport complex, are temporarily suspended”.