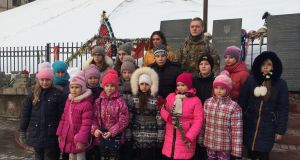 Tatyana approached the young soldier as he strolled towards Kiev’s Maidan square, then took his arm and walked with him a little way, followed by the gaggle of children she had brought here to honour Ukraine’s “Heavenly Hundred”.

After talking for just a few moments, Tatyana and the soldier had to stop. The children, bundled up in bright winter coats and hats, also stopped and stared silently at their teacher and this big man in camouflage, as they hugged each other and cried.

The soldier said it was too difficult to talk to the children about what happened here three years ago, but he stood with them for a photograph at a memorial to more than 100 people who were killed during what Ukrainians call their “Revolution of Dignity”.

“It’s our Ukraine, our motherland and we love her,” Tatyana said.

“We hope the children never see anything like this again, but we want them to understand what happened. We want them to be proud of Ukraine. Things have changed and are changing here – it’s happening slowly, but they are changing for the better.”

Ukraine is preparing for four days of events to mark the bloody end of the 2014 revolution, which saw security forces gun down protesters on Maidan and Kremlin-backed president Viktor Yanukovich and his closest allies flee to Russia.

Officials say that in Kiev alone some 6,000 police officers and national guard members will be on duty to maintain order, giving an indication of the scale of the perceived security threats that still bedevil this country of 40 million people.

More than 30 people have been killed and dozens injured in a recent surge in violence in eastern Ukraine, where government troops are fighting a mixed force of Russians and local separatists that relies on military and other aid from Moscow.

Russian president Vladimir Putin stoked fears of a further escalation on Thursday, when he told members of his country’s FSB security service that Ukraine’s authorities “are clearly not ready for a peaceful settlement to this most complex problem, and are banking on a solution through force”.

“What is more, they openly talk about organising diversionary-terrorist and subversive activity, including in Russia. This has to be concerning for us.”

As Tatyana talked to the children about Maidan, workers on the square were erecting a stage for the anniversary events, and beside them hung a banner bearing contact details for the “base of the blockade against trade with terrorists”.

This is a new challenge now facing pro-western president Petro Poroshenko and his government: activists who are blocking major rail lines near the frontline to prevent shadowy trade with separatist-held areas, particularly in coal.

Mr Poroshenko says the blockade could lead to a collapse of major factories and heating systems that run on certain grades of coal that are most easily and cheaply sourced in areas now controlled by the militants.

The European Union and United States have warned of potentially disastrous economic consequences if the blockade continues, and Ukrainian officials warned of huge financial losses and possible disruption to domestic power supplies.

“We are concerned by the current disruption to the coal supply from the non-government-controlled areas of Donetsk and Luhansk and its potential impact on Ukraine’s energy system, the Ukrainian economy, and the Ukrainian people,” the US embassy in Kiev said in a statement.

The EU delegation in Kiev said the blockade could “lead to an energy crisis that would harm Ukrainians on both sides” of the frontline.

“Those who started the blockade should end it immediately. The Ukrainian authorities, in turn, should solve this problem as soon as possible,” the EU added.