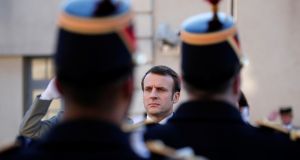 French president Emmanuel Macron reviews the troops before delivering a speech about a EU defence strategy, at the Ecole Militaire, in Paris on Friday. Photograph: Francois Mori/Pool via REUTERS

Following Brexit, France is the only nuclear power in the European Union.

It is traditional for every French president to deliver a speech explaining the rationale for the 60-year-old force de frappe.

Mr Macron spoke of the “accelerating disintegration” of international legal order and institutions and seemed to refer to US president Donald Trump.

“The very idea of multilateral order founded on law, where recourse to force is regulated . . . is profoundly questioned today,” he said. “The only law is the law of force.”

Alluding to the assassination of Iranian general Qassem Suleimani by US forces, Mr Macron said “the escalation in Iraq in January shows how situations can, at any moment, create an open crisis between states who seem to have forgotten the reason of ‘no more war’ in favour of a hypothetical ‘why not war?’”

We expect the great partners of Europe to work to preserve and strengthen international law, not to weaken it

The promotion of multilateralism, development of strategic partnerships, a self-reliant Europe and national sovereignty “give its overall coherence and profound meaning to our defence strategy”, Mr Macron said. In a further allusion to Mr Trump, he added: “We expect the great partners of Europe to work to preserve and strengthen international law, not to weaken it.”

Mr Macron said Europeans must “define their security interests together”. His rapprochement with Russia was intended “to improve conditions of collective security and stability in Europe”. He called upon Europeans “to propose together an international agenda for arms control”, but excluded the possibility of French unilateral nuclear disarmament.

Disarmament “cannot be an objective for its own sake”, Mr Macron said. “It must first of all improve the conditions of international security.” He noted repeatedly that the 1968 Treaty on the Non-Proliferation of Nuclear Weapons recognised France as one of five established nuclear powers.

Citing provisions of the treaty, Mr Macron called for a conference to draw up a treaty banning the production of fissile material for weapons, and a universal ban on nuclear testing.

Mr Macron delivered his address as the arms control regime is crumbling. The Intermediate-Range Nuclear Forces Treaty between the US and Russia expired last year. The US-Russian New START agreement on long-range forces will expire next year. North Korea carried out 23 nuclear tests last year. Following Mr Trump’s renunciation of the Iran nuclear accord, the Islamic Republic has restarted its uranium enrichment programme.

In November, Mr Macron raised hackles by referring to “the brain death of Nato”. He wanted “to clear up a misunderstanding”, he said on Friday.

“The question for Europeans is not whether they should defend themselves with or without Washington . . . France is convinced that in the long term, European security means a strong alliance with the US . . . but our security, inevitably, must also be based on greater autonomous capacity for action by Europeans.”

The real question for Europeans was why they so diminished their defence spending, Mr Macron said. “Our incapacity to think through our sovereign interests together, and to act together convincingly, threatens our credibility as Europeans.”

French nuclear weapons “play a deterrent role in Europe”, Mr Macron said. “They strengthen the security of Europe through their very existence, and in this way have an authentically European dimension.”

Like his predecessors, Mr Macron stopped short of promising to use French nuclear weapons on behalf of a European ally. French doctrine is deliberately ambiguous, to leave potential aggressors in doubt. “The vital interests of France now have a European dimension,” Mr Macron said.

Like Nicolas Sarkozy in 2008, Mr Macron invited those Europeans who so wish to engage in a “strategic dialogue” with France “on the role of French nuclear deterrence in our collective security”.

Our nuclear deterrent force remains, as a last resort, the keystone of our security

Mr Macron noted that under the 2010 Lancaster House treaties, France and the UK engage in “unprecedented co-operation on nuclear subjects . . . Brexit will change nothing.”

Since the gilets jaunes crisis last year, Mr Macron has renounced all semblance of budgetary rigour. He promised the amphitheatre filled with men and women in uniform “an unprecedented budgetary effort for defence, major and lasting”.

France has already committed to spending €37 billion to modernise its nuclear forces between 2019 and 2025. France has nearly 300 nuclear warheads, Mr Macron said.

French nuclear weapons are “strictly defensive”, but Mr Macron rejected a no first use commitment on the grounds that “a nuclear warning” might be necessary in the event that a state aggressor underestimated France’s determination to protect her vital interests.

Mr Macron summarised French nuclear doctrine thus: “Our nuclear deterrent force remains, as a last resort, the keystone of our security and the guarantor of our vital interests. Today, as yesterday, it guarantees our independence, our freedom of judgment, decision and action. It prevents the adversary from gambling on successful escalation, intimidation or blackmail.”