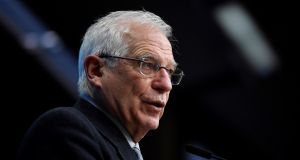 The European Union is under pressure to take a tough line with Russia when its foreign policy chief meets officials in Moscow amid international outcry over the jailing of the country’s opposition leader Alexei Navalny.

Josep Borrell says he will raise Mr Navalny’s case with Russian foreign minister Sergei Lavrov on Friday, when he also plans to meet members of civil society groups that are being targeted by an increasingly authoritarian Kremlin.

After a series of failed attempts to “reset” relations with Moscow, the EU faces calls to adopt a stronger stance with Russian president Vladimir Putin, but member states disagree over how to sway the country’s ruler of 20 years.

“This [list] needs to be in Josep Borrell’s suitcase when he leaves for Moscow ... and rolled out if his visit fails to achieve progress,” said Guy Verhofstadt, a senior member of the European Parliament and former Belgian prime minister.

“It’s no use going to Moscow just to advertise his weakness. What a shame that would be, to see the EU again handicapped by its own unanimity rule, the pace of its foreign policy set by those unwilling to move.”

The EU’s eastern states and France want Germany to halt its Nord Stream 2 gas pipeline project with Russia; Berlin is unwilling to do so, however, and members including Hungary, Italy, Bulgaria and Cyprus have at times objected to the imposition of stricter sanctions on Moscow.

Amnesty International urged the EU on Wednesday to “take robust and public action to support those in Russia who courageously defend human rights in the face of spiralling levels of repression.”

The group said Mr Borrell must “send a strong signal that empowers civil society and counters any perception that business with the EU continues as usual while the Russian authorities orchestrate a wide-scale clampdown on human rights and dissent.”

Mr Navalny was jailed for two years and eight months for allegedly violating his parole by failing to report to the Russian authorities late last year, when he was recovering abroad from a near-fatal poisoning in Siberia; the Kremlin denies that it ordered the nerve-agent attack and his imprisonment.

The campaigner was arrested last month on his return from Germany, sparking rallies across Russia in which more than 9,000 people were detained; after he was sentenced on Tuesday, riot police arrested another 1,400 demonstrators in Moscow and Saint Petersburg, and beat many unarmed protesters with batons.

“Regarding events in Russia, and not only with Navalny, the West’s coverage is selective and one-sided. The hysteria that we have heard concerning the trial in the Navalny case is way over the top,” Mr Lavrov complained.

He said he had sent Mr Borrell footage comparing how police in Russia and in EU states handle protests, so that “while preparing for his upcoming visit to Moscow ... he could get acquainted with how we see the objective picture”.