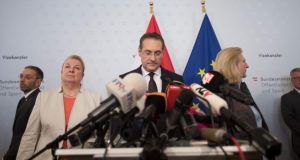 Austria is facing a snap election after chancellor Sebastian Kurz demanded the cabinet dismissal of a senior member of his disgraced populist coalition partner.

On Sunday, Heinz-Christian Strache stood down as vice-chancellor and leader of the junior coalition Freedom Party (FPÖ) after secret recordings emerged that appeared to show him offering state contracts in exchange for dubious party donations.

Mr Kurz, leader of the conservative People’s Party (ÖVP), collapsed his coalition and is seeking fresh elections in the autumn. Until then he wants to head a caretaker minority government without FPÖ interior minister Herbert Kickl.

Mr Kurz said he had hoped for the resignation of Mr Kickl, to avoid him attempting as interior minister to oversee a graft probe of his own party.

“He didn’t take this step so in consultation with the president I decided to propose his dismissal,” said Mr Kurz on Monday evening, opening the door to the first ministerial firing in postwar Austrian history.

As pressure built for him to resign, Mr Kickl, the FPÖ’s chief ideologue, accused Mr Kurz of “being stone-cold sober yet drunk on power”.

Mr Kickl is a controversial yet powerful FPÖ figure and his party cabinet colleagues have promised to follow him in solidarity from the cabinet table. That could have repercussions for Mr Kurz when the populist party joins the opposition benches.

A looming emergency parliamentary sitting is likely to include a vote of no confidence in Mr Kurz. If the FPÖ votes with the opposition and against the government, the 32-year-old chancellor could be toppled after just 18 months in power.

The conservative leader said he was aware the scandal could have damaged his country’s reputation abroad, but suggested the worst damage would be caused by those directly responsible.

“The Freedom Party has destroyed itself,” he told the Bild tabloid, adding that charges against Mr Strache could not be ruled out.

The secret video, recorded in a villa on Ibiza three months before the 2017 election, appears to have been part of an elaborate sting operation. The videos were passed onto two German media outlets but their origin remains unclear.

On Monday, the FPÖ’s new leader, Norbert Hofer, insisted the party had broken no campaign funding rules, promised a full external audit of accounts and attacked the resignation demands of the chancellor.

Mr Kurz shrugged off attacks from his former coalition partner, insisting he would continue to rule until election day with experts or senior civil servants replacing the departing FPÖ ministers.

A first opinion poll since the scandal suggests the conservative chancellor’s decision to go for broke could yet pay off.

The FPÖ is down by up to seven points in the new poll while the chancellor’s ÖVP is Austria’s most popular party, up four percentage points to 38 per cent. But even that popularity boost leaves the young chancellor a long way from an absolute majority required to govern alone.

The first real political test will be at the weekend European elections, with opposition parties trying to pin the blame for the scandal on Mr Kurz – for entering office with the populist party in the first place.

He struck a defensive note with Bild when reminded of his ex-coalition partner’s far-right links and history of xenophobia and anti-Muslim agitation. Mr Kurz insisted his government had worked productively to balance the budget and push through tax cuts for voters.

“In order to pursue our agenda and bring about change, I had to be willing to endure quite a lot,” he said. In the coming weeks and months, he is likely to endure a lot more.