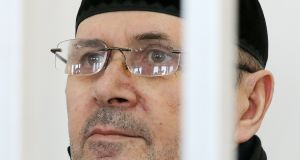 Prosecutors in Russia’s Chechen Republic have recommended that the human rights activist Oyub Titiev be jailed for four years at the close of a controversial narcotics trial that critics say was politically motivated.

Mr Titiev, the head of the Memorial human rights organisation in Chechnya, was arrested in January last year after police said they had found a packet of marijuana in his car. He denies wrongdoing and says officials fabricated the charge to punish him for his work to expose brutal human rights abuses in Chechnya.

At a court hearing in Chechnya on Monday, prosecutor Dzhabrail Akhmatov said evidence brought to light during Mr Titiev’s seven-month trial proved he was guilty of illegal drugs possession. The prosecution said the 61-year-old rights activist should serve four years in jail for his crimes and pay fines of Rbs 100,000 (€13,000).

The court is expected to convene again next week to decide Mr Titiev’s fate.

Russian and international rights groups say it is unthinkable that Mr Titiev, a devout Muslim known for his healthy lifestyle, would ever take or trade drugs and have condemned his trial as a sham and an affront to justice.

They say that no Chechen court would dare to defy Ramzan Kadyrov, the strongman president of Chechnya, who has publicly condemned Mr Titiev as a “drug addict” and a “traitor” working for an enemy organisation.

Defence lawyers asked for the trial to be transferred to a Russian federal court last year but the request was rejected.

“We have already seen enough in this case to know that the purpose of Oyub’s trial is not justice but revenge,” Nataliya Priyutskaya, Russian researcher at Amnesty International, said on Monday. “The repressive machine of the Russian criminal justice is in full swing.”

Mr Titiev became head of Memorial’s office in Grozny, the Chechen capital, in 2009 after his predecessor Natalya Estemirova was kidnapped and shot dead. Nobody has been charged with her murder.

As one of the last remaining human rights defenders brave enough to continue working in Chechnya, Mr Titiev campaigned for the investigation of alleged torture, extrajudicial killings and extortion by law enforcers in the republic.

After his arrest in January 2018 his family fled Chechnya fearing official reprisals. Memorial’s office in the neighbouring republic of Ingushetia was attacked and burned down by unknown culprits.

Mr Kadyrov has described allegations of official rights violations in Chechnya as a myth designed to destabilise his government and promised to bar human rights defenders from the republic once Mr Titiev’s trial ends.

The US and the European Union have called for the immediate release of Mr Titiev and urged the Russian and Chechen authorities to respect the activist’s right to a fair trial and protection from judicial harassment .

In a resolution adopted last month, the European Parliament said the arrests of human rights defenders in Chechnya on fabricated grounds and the intimidation of their families and colleagues “appeared to serve the aim of impeding and ultimately ending the legitimate and useful work of these organisations” in the republic.