Catalan leader under fire for invoking Slovenia’s ‘road to freedom’ 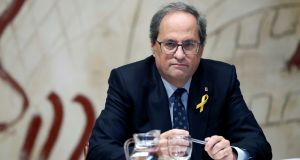 ‘ Catalan president Quim Torra has been accused of wanting to spark a violent conflict with Spain after calling on his region’s people to emulate Slovenia’s bid for independence.

“There is no way back on the road to freedom,” Mr Torra said on Saturday after a visit to Slovenia. “The Slovenians decided to push ahead with all the consequences. Let’s do the same as them and let’s be willing to do anything to live freely.”

Slovenia gained independence from Yugoslavia in 1991 after the so-called 10-Day War in which several dozen people died.

Allies of Mr Torra subsequently insisted that they back a peaceful independence process. However, the comments drew widespread condemnation, with Spanish government spokeswoman Isabel Celaá describing them as “senseless”, adding that “Catalonia is not Slovenia, nor is Spain Serbia.”

Foreign minister Josep Borrell said Mr Torra’s words were apparently “calling for an insurrection”. However, he played down their significance, adding that looking back on announcements by the Catalan independence movement, “you will see how many times they have said: ‘We have to copy Ireland’ or ‘We have to copy Kosovo.’”

“Mr Torra is invoking a civil conflict that caused dozens of deaths, which is what happened in Slovenia,” said Inés Arrimadas, leader of the unionist Ciudadanos party in Catalonia. “And Mr Pedro Sánchez is looking the other way without doing a thing.”

Both Ciudadanos and the conservative Popular Party (PP) renewed calls for the government to reintroduce direct rule in Catalonia to stem further moves towards independence.

In October 2017, the Catalan government staged a referendum on secession despite opposition from the Spanish judiciary and the region’s parliament subsequently declared independence before Madrid introduced direct rule. Eighteen pro-independence politicians are now awaiting trial for their role in those events, with nine in custody.

Mr Torra’s comments highlighted a division within the region’s pro-independence coalition government, between the president’s Together for Catalonia (JxCat) party and the Catalan Republican Left (ERC). When asked about the controversy, the speaker of the Catalan parliament, Roger Torrent of ERC, said that his party favoured “the Scottish way”, that is, the peaceful negotiation of an independence referendum with the central government.

Mr Torrent also appeared to criticise pro-independence activists, many of them with their faces covered, who blocked roads and opened toll road barriers on motorways over the weekend.While Mr Torra has praised these groups in the past, Mr Torrent said that “the republic is built with our faces uncovered and by building a social majority”. Polls show that Catalonia is virtually split down the middle on the independence issue.

Last week, four jailed JxCat politicians began a hunger strike as they await their trial, alleging that the Spanish judiciary has wilfully blocked their legal appeals. However, ERC’s support for the action has been lukewarm.

The Catalan police force has been another cause of concern for the regional government. Mr Torra called for changes to senior personnel in the force, which is supervised by his administration, after it charged at demonstrators who were protesting against far-right party Vox last week in the cities of Girona and Terrassa.