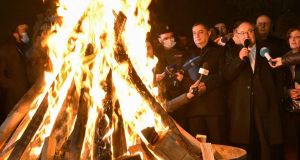 Politician Vazgen Manukyan (third from right) attends a march to demand the resignation of Armenia’s prime minister Nikol Pashinyan over a controversial peace agreement with Azerbaijan that ended six weeks of war over the disputed region of Nagorno-Karabakh. Photograph: Karen Minasyan/AFP via Getty Images

Azerbaijani forces have been accused of capturing dozens of Armenian fighters in the disputed region of Nagorno-Karabakh, putting further strain on a Russian-monitored ceasefire and stoking more anger towards Armenia’s government.

Embattled Armenian prime minister Nikol Pashinyan said members of Russia’s 2,000-strong peacekeeping force were also surrounded by Azeri troops on Wednesday, describing it as “somewhat of a crisis situation”; the defence ministry in Moscow denied this, according to Russian news agencies.

Azerbaijan and Armenia blame each other for skirmishes that have shaken a Moscow-brokered peace deal which came into effect on November 10th, after six weeks of fighting claimed more than 5,500 lives in and around Nagorno-Karabakh.

The accord returned much of Nagorno-Karabakh and surrounding districts to Azerbaijan, more than 25 years after the region was seized by its ethnic Armenian majority. Tension is still high, however, amid disputes over who controls certain areas and efforts to secure positions.

Armenia’s defence ministry reported losing contact with troops near the villages of Khtsaberd and Hin Tagher on Tuesday night, and on Wednesday Arayik Harutyunyan, the head of Nagorno-Karabakh’s separatist administration, confirmed that “a few dozen of our servicemen” had been captured in that area.

“There is a problem with communications due to the terrain and because of the events . . . also the Russian peacekeepers have these problems, and we have somewhat of a crisis situation there.”

There was no immediate comment on the incident from Azerbaijan, which with strong Turkish support and high-tech drones bought from Ankara dominated the recent fighting and rebuffed several Russian and western calls to halt hostilities.

Several Armenian soldiers were reportedly wounded last weekend in skirmishes around Khtsaberd and Hin Tagher, which Azerbaijan described as part of an operation to root out fighters who had killed Azeri troops in recent weeks.

Mr Harutyunyan accused Azerbaijan of showing “disrespect” to Russia as the broker of the ceasefire agreement and provider of peacekeeping troops.

“With the military-political leadership of Armenia we are working with the Russian side to jointly prevent provocations by the Azeri side. The defence army [of Nagorno-Karabakh] is fulfilling its duties to the best of its ability,” he added.

Energy-rich Azerbaijan’s victory sparked a political crisis in Armenia, where Mr Pashinyan has faced street protests, calls to resign and an alleged assassination plot that was foiled by the security services.

Protesters blocked at least two major roads on Wednesday morning and gathered outside the Armenian defence ministry to demand news of the captured soldiers. In the evening, opposition politicians led a larger rally in the centre of the capital, Yerevan, to call for Mr Pashinyan’s resignation and snap elections.

“I consider myself to be the main person responsible, but not the main person who is guilty” for recent events, said Mr Pashinyan, who accuses his allegedly corrupt political enemies of exploiting the crisis for their own ends.

“It’s not a question of whether or not the prime minister leaves, but of who decides who will be prime minister,” he added. “The people should decide.”