Withdrawal of US, which provides 20% of Unesco funding, severe blow for organisation 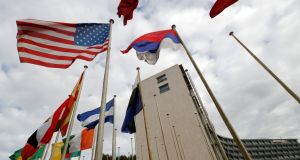 An American flag flies outside the headquarters of the United Nations Educational, Scientific and Cultural Organization (UNESCO) in Paris, France. Photograph: REUTERS/Philippe Wojazer

The United States announced on Thursday it was withdrawing from Unesco, the UN’s cultural and educational agency, complaining about how it is run and about what Washington described as bias against Israel.

“This decision was not taken lightly, and reflects US concerns with mounting arrears at Unesco, the need for fundamental reform in the organization, and continuing anti-Israel bias,” State Department spokeswoman Heather Nauert said in a statement.

The withdrawal of the United States, which provides a fifth of Unesco’s funding, is a severe blow for the Paris-based organisation, which began work in 1946 and is known for designating World Heritage sites such as the ancient city of Palmyra in Syria and the Grand Canyon National Park.

Under Unesco rules, the withdrawal will become effective as of the end of December 2018. Until that time, the United States, which provides around $80 million to Unesco annually, will remain a full member.

The organisation, which employs around 2,000 people worldwide, most of them based in Paris, has long been the object of criticism over its use of resources and resolutions that have been perceived by Israel and other countries as biased.

Director-General Irina Bokova expressed disappointment at the US decision.

“At the time when conflicts continue to tear apart societies across the world, it is deeply regrettable for the United States to withdraw from the United Nations agency promoting education for peace and protecting culture under attack,” she said.

Unesco is in the process of selecting a new chief, whose priority will be to revive its fortunes.

The US move underscores the scepticism expressed by President Donald Trump about the need for the United States to remain engaged in multi-lateral bodies. The president has touted an “America First” policy, which puts US economic and nationalist interests ahead of international commitments.

Since Trump took office, the United States has abandoned the Trans-Pacific Partnership trade talks, withdrawn from the Paris climate deal and opened up a renegotiation of a decades old trade agreement with Canada and Mexico, Nafta. Trump has also called Nato obsolete, though he has since backtracked on that.

Diplomats expressed concern about the loss of US engagement.

“The absence of the United States or any large country with a lot of power is a loss. It’s not just about money, it’s promoting ideals that are vital to countries like the United States, such as education and culture,” a Unesco-based diplomat said.

For differing reasons, Britain, Japan and Brazil are among states that have yet to pay their dues for 2017.

After three days of secret balloting that could run until Friday, Qatar’s Hamad bin Abdulaziz al-Kawari and France’s Audrey Azoulay are tied to win the top post at the organisation, with Egyptian hopeful Moushira Khattab in third. Two other candidates trail.

Voting lasts over a maximum five rounds. If the two finalists end level, they draw lots.