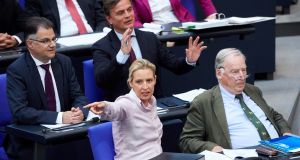 The co-chairpersons of the right-wing populist ‘Alternative for Germany’ (AfD) party’s parliamentary group, Alice Weidel and Alexander Garland (front row), and others in the German ‘Bundestag’ parliament, in Berlin. Photograph: Hayoung Jeon/EPA

After months of warm-up, Germany’s new political reality crashed into the Bundestag on Wednesday when the far-right Alternative für Deutschland (AfD) hijacked the budget debate to attack the “idiots” it said are running the country.

Traditionally, Berlin’s budget week sees a lively exchange of robust political rhetoric between government and opposition benches. For the first time, however, the AfD, as largest political party, opened the debate. And AfD parliamentary party leader Alice Weidel made the most of her top spot in the running order.

She presented her party as the last bastion against an “exploitative, lord of the manor” tax policy that forced ordinary Germans to underwrite a profligate EU and immigration of “burkas, headscarf girls, welfare-claiming knife-men and other do-nothings who will not secure our prosperity, economic growth and welfare state”.

Ms Weidel concluded her speech with a quote from Czech president Milos Zeman: “If you live in a country where fishing without a licence is punished but illegal border crossings without a valid passport are not, then you are perfectly entitled to say, ‘This country is being governed by idiots’.”

The AfD leader’s speech had the desired effect: cheers from her party, outrage in the chamber and a reprimand from Bundestag president Wolfgang Schäuble that her remarks “discriminated against all women who wear a headscarf”.

It also complicated her follow-up speaker, Angela Merkel, who favours a low-key, low-conflict rhetorical style. She stuck to her script and mentioned the AfD not once. Instead she defended her government against last week’s swipe by French president Emmanuel Macron that Berlin’s balanced budget “fetish” is hindering far-reaching EU reform.

Ms Merkel disagreed, saying Germany’s balanced budgets since 2009 were “anything but self-evident” and sustainable politics for future generations.

It was “right and proper” for the ESM bailout fund to evolve further, she said, without backing calls for a European monetary fund. But it was difficult to balance reform spending plans with growing financial contributions to the post-Brexit EU budget, particularly as this year will be the first time since 2002 that Germany’s federal debt will drop below the stability pact ceiling.

Ms Merkel is confident of presenting Franco-German EU reform proposals before next month’s European Council meeting, but warned: “Even the [German] finance minister has to follow the basic rules of arithmetic.”

Ignoring AfD heckling, Merkel stuck to her stateswoman script, insisting that Europe must do more in the Syrian conflict and expressed hope of salvaging and building on an Iran nuclear deal. It was not an ideal arrangement, she conceded, but it was wrong for the US to pull out given Tehran “fulfils its obligations under the agreement”.

The German leader said she was “hesitant” over a European Commission digital tax proposal. Not because she thought Facebook, Google and Amazon should get away with paying next to no tax in Europe, but because it was not thought through and left open whether it would tax technologically-advanced cars “as the internet on wheels or in the old corporate tax system”.

When she finished, the heated Bundestag debate that followed was dominated not by her contribution, but by reaction to AfD provocation. The party had already stirred controversy this week when regional leader Björn Höcke became the first leading AfD figure to speak at a rally of Dresden’s anti-Islamic “Pegida” grouping.

Höcke told a crowd of about 1,000 people that Europe was facing a “new totalitarian ideology” of open borders that would leave Germans as a “minority in their own country”.

A week ago the AfD dismissed an application to expel Höcke from the party after he claimed last year Germany was “crippled” by its commemoration culture of its Nazi-era crimes. The decision not to expel Höcke, the opposition Green Party said, indicated how dependent the party had become on the increasingly influential Höcke and his brand of “ethnic nationalism”.

“This is a very serious development, something those who seek to defend democracy and rule of law must keep a close eye on,” said Konstantin von Notz of the Green Party.

With support for the AfD steady at about 13 per cent in polls, similar to its election result last September, Germany’s other parties are learning how to tackle AfD provocations – but still struggle to prevent the party making itself the centre of attention.

“The AfD propaganda ignores reality but, to mobilise their own supporters, they choose issues that polarise – refugees, anti-EU,” said Gero Neugebauer, a Berlin political scientist.

Ms Weidel, a 39-year-old former banker and consultant, is a regular target of attacks on social media. This week she found herself in the headlines again thanks to a controversial German rapper who promised to “break the nose” of the “Nazi bitch” and kick her “until she isn’t able to spell her name”.