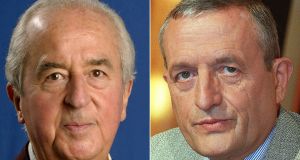 The so-called Karachi trial, which opens on Monday in Paris and is to continue until the end of the month, is a murky tale of arms sales and kickbacks at the highest echelons of French power, a quarter of a century ago. It may be linked to a bus bombing that killed 11 French citizens and four Pakistanis in 2002.

The trial has been called a torpedo that took 25 years to reach its target. The case has been split between ordinary defendants, on trial this month, and the alleged top decision-makers, former prime minister Edouard Balladur, now aged 90, and François Léotard (77), who was Balladur’s defence minister. The Court of Justice of the Republic will try them at an unspecified later date, it was announced on October 1st.

The CJR was established in 1993 to try government ministers accused of breaking the law while in office. It is often criticised as slow and excessively clement.

Balladur and Léotard have been charged with complicity in the misuse of company funds and concealment for allegedly setting up a complex system of kickbacks on arms deals, intended to finance Balladur’s 1995 presidential campaign.

Although he has not been charged, the former president Nicolas Sarkozy is also involved in the Karachi case, one of a half dozen in which he has been linked to financial impropriety.

Sarkozy will stand trial for using a public relations firm called Bygmalion to illegally finance his 2012 presidential campaign, it was also announced on October 1st.

As budget minister under Balladur, Sarkozy authorised the payment of at least one kickback to the “K network” of middlemen who facilitated the sale of submarines to Pakistan and frigates to Saudi Arabia, according to the investigative website Mediapart. Sarkozy also approved the creation of a front company in Luxembourg to repatriate kickbacks to France, Le Monde reported.

Several men closely associated with Sarkozy are among the six defendants whose trial begins on Monday. Thierry Gaubert was deputy director of Sarkozy’s cabinet. Balladur’s campaign director Nicolas Bazire worked with Sarkozy when the latter was mayor of Neuilly, and was a witness at Sarkozy’s marriage to Carla Bruni.

Another defendant, the Lebanese arms dealer Ziad Takieddine, was the lynchpin of the K network. Much later, Takieddine would help then president Sarkozy obtain the liberation of Bulgarian nurses imprisoned in Libya. He turned against Sarkozy and claims the late dictator Muammar Gadafy helped finance Sarkozy’s 2007 campaign.

The top secret file in the sprawling case is more than 50,000 pages long, but the 61-page summing up in which attorney general François Molins recommended that Balladur and Léotard stand trial summarises it well.

Molins became famous in France as Paris prosecutor, when he delivered straightforward televised exposés following terrorists attacks in 2015 and 2016. The Karachi trial is based on an investigation by the highly regarded anti-corruption judge Renaud Van Ruymbeke.

Balladur, Molins wrote, “was informed of the broad outlines, but sufficiently, of the negotiation of the [arms] contracts.” He concluded that the then prime minister “was aware of the exhorbitant commissions attached to the contracts, and that he approved them or at a minimum let them go through”.

Commissions on the sales of three Agosta class submarines to Pakistan and four Sawari II frigates to Saudi Arabia came to a staggering €327 million. François Léotard, who was defence minister at the time, argues that the commissions were “decisive” in sealing the contracts.

The commissions – essentially bribes to Pakistani and Saudi officials – were written off as “exceptional commercial expenses” and were arguably not illegal at the time. The middlemen in the K network, Takieddine, Ali Ben Moussalem and Abdul Rahman Al-Assir, received €33 million.

The €2 million in illegal kickbacks that Balladur and Léotard are accused of siphoning back to Paris was modest by comparison.

Investigators say most of the €2 million – 10 million French francs at the time – was deposited in large banknotes in Balladur’s campaign finance account in April 1995. Molins dismissed as ridiculous Balladur’s claim that the money came from the sale of pins and T-shirts at his campaign rallies.

Deposits in Balladur’s campaign fund coincided with Takieddine’s trips to Geneva. Takieddine told investigators he gave the cash to Gaubert, on orders from Bazire.

Gaubert’s ex-wife Hélène says Gaubert told her he kept money in Switzerland for Bazire and Balladur.

The 11 French engineers killed in the 2002 bus bombing in Karachi were all working on the submarine contract. The attack was attributed to al-Qaeda at the time, but a secret report later alleged it was ordered by Pakistani officials who were angry because then president Jacques Chirac, who had defeated Balladur for the conservative nomination in 1995, cancelled payment of commissions on the submarine deal.