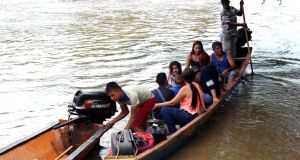 A group of people crosses the border from Venezuela to Colombia on a boat navigating the Sardinata River in Puerto Santander, Colombia. Photograph: Manuel Hernandez/EPA

Brazil and Argentina’s foreign ministers visited Bogotá on Friday in an effort to kick-start dialogue between Colombia and Venezuela over a border crisis that has seen more than 16,000 Colombians leave their adopted home.

Venezuelan president Nicolas Maduro last month closed several border crossings and deported 1,300 Colombians in what he called a crackdown on smuggling and crime in the turbulent area.

Another 15,000 have crossed the border voluntarily during the sweep, according to the United Nations, many crossing a river with only what they can carry on their backs.

Colombia contends many of the deported were in Venezuela legally, and there has been an outcry from rights groups over security forces branding houses with a “D” for demolition and razing some of them.

About 5.6 million Colombians live in Venezuela.

Brazil’s Mauro Vieira and Argentina’s Hector Timerman met with their Colombian counterpart, Maria Angela Holguin, to “express their disposition to promote a dialogue between these two countries,” a joint statement from the three said.

They are due to meet with Venezuelan foreign minister Delcy Rodriguez in Caracas on Saturday.

“The two foreign ministers look to contribute to the solution to humanitarian and economic problems on the border,” the statement added.

Images of hundreds of Colombians wading across a border river with refrigerators, chickens and mattresses on their backs as goats and children followed shocked many in Latin America. Diplomatic responses, however, have been muted.

In a setback for Colombia, the Organization of American States (OAS) voted against its proposal for a meeting on the border situation.

Colombia is housing many of its deported citizens in tents and other temporary facilities.

On Friday, Venezuela allowed dozens of children who attend school in Colombia to cross back for classes.

Venezuela’s political opposition accuses Mr Maduro of using Colombians as scapegoats to distract from the country’s economic crisis ahead of December’s parliamentary election.

However, Mr Maduro counters that he is protecting Venezuela by targeting criminals who smuggle everything from gasoline to flour across the border. And he says no other country has done more for Colombians over the years than Venezuela, which has taken in refugees and economic migrants for decades during Colombia’s civil conflict.