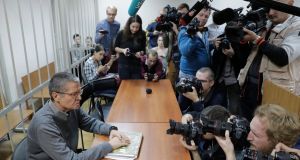 Russian state prosecutors have asked a Moscow court to hand Alexei Ulyukaev, the former economy minister, a 10-year prison sentence for taking a bribe as a high-profile corruption trial drew to a close on Monday.

Mr Ulyukaev, the first serving Russian minister to be arrested since the fall of the Soviet Union, has denied charges that he accepted an illegal payment of $2 million (€1.7 million) from Igor Sechin, the chief executive of Rosneft, the state oil company, last year.

He claims the powerful oilman colluded with the Russian FSB, the successor agency to the Soviet KGB, to fabricate the case against him. But at a court hearing on Monday prosecutors accused Mr Ulyukaev of using his official position for personal enrichment and recommended that the disgraced former minister serve 10 years in a high-security jail and pay a fine of 500 million roubles (€7 million).

Monday’s court hearing marked a climax in the 4½ month trial that has been closely watched for signs of how power struggles in the Kremlin are playing out as Russia prepares for a presidential election next March.

Mr Sechin, a long term ally of Vladimir Putin, is associated with the so called siloviki faction that, dominated by security services veterans, advocates strong state control of the economy and all areas of Russia’s political life.

Mr Ulyukaev, until his dismissal last November, belonged to a group of liberal-minded officials that has steered the economy along a pro-market course, but failed to gain Mr Putin’s backing for more far-reaching structural reforms.

The following month the two men had talks at Rosneft’s Moscow headquarters where Mr Sechin handed over a locked bag stuffed with cash. Mr Ulyukayev was arrested as he left the building. Within hours he had lost his job.

Mr Ulyukayev has admitted accepting the fateful bag, but claims he thought it contained fine wines that the Rosneft chief had promised to gift him. Defence lawyers have accused Mr Sechin of cooking up a plot against the economy minister with General Oleg Feoktistov, a former FSB officer, who was at the time serving as head of security at Rosneft.

Mr Sechin turned down three court summons during the trial claiming his packed schedule at Rosneft prevented him from taking time out. Gen Feoktistov gave evidence at the court in September, but the hearing was closed to the public at the request of the FSB.

Timofei Gridnev, lawyer for Mr Ulyukaev, slammed the handling of the case on Monday, saying the charges against his client were “like reinforced concrete, where there is no way out and no way in”.