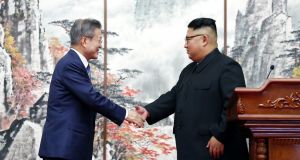 In what appears to be a move aimed at kick-starting stalled talks between the US and North Korea, the North will also close its Yongbyon nuclear plant, if the US responds with “corresponding measures”.

“The North has agreed to permanently shut down its Dongchang-ri missile engine testing facility and missile launch pad under the participation of experts from related countries,” Mr Moon said in a joint press conference with Mr Kim after the summit, which was broadcast live in South Korea.

The reference to experts is important as it is a key demand of the US that the steps be verified by nuclear experts.

“The North expressed its willingness to continue taking additional steps, such as the permanent shutdown of the Yongbyon nuclear facility, should the United States take corresponding measures under the spirit of the June 12 North Korea-US joint statement,” read a statement issued after the meeting, referring to the meeting between US president Donald Trump and Mr Kim in Singapore in June.

North Korea wants relief from punishing international sanctions as a reward for its efforts so far, which have included shutting one test facility and repatriating the remains of US servicemen missing since the end of the Korean War (1950-53).

However, Washington is resisting, saying the pressure will be sustained until Pyongyang fully denuclearises.

Mr Moon said it was the first time the two Koreas had discussed detailed steps towards denuclearisation. “I hope the talks between the North and the US quickly resume,” he told the press conference.

The news from the third inter-Korean summit was welcomed by Mr Trump, who tweeted: “Kim Jong Un has agreed to allow Nuclear inspections, subject to final negotiations, and to permanently dismantle a test site and launch pad in the presence of international experts.”

Mr Moon is expected to brief the US leader on the outcome of the talks when he travels to Washington next week.

Mr Kim would visit Seoul at some point “in the near future”.

“The September declaration will open a higher level for the improvement in relations [between South Korea and North Korea] . . . and bring closer the era of peace and prosperity,” Mr Kim told the news conference.

The agreement also includes steps to further improve inter-Korean ties, such as the reopening of rail and road links across the heavily fortified border between the two countries by the end of the year and also reopening of the Kaesong joint industrial zone, which was shut down in 2016 over sanctions. Reopening the zone may require some sanctions to be lifted first.

They will also aim to allow more cross-border visits for families.

The two Koreas will continue to jointly take part in international sporting events, including the 2020 Olympic Games, and they will bid to jointly host the 2032 summer Olympic Games.