Australia bushfires: Anger in the village that ran out of water

When a fire storm swept over his property in Australia's new South Wales, destroying numerous properties in its path, Steve Harrison had no time to leave. Video: Reuters 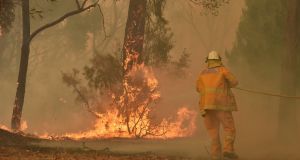 A fireman fights a bushfire to protect a property in Balmoral, 150kms southwest of Sydney. A state of emergency was declared in Australia’s most populated region as a record heat wave fanned unprecedented bushfires. Photograph: Getty

Under attack from multiple fires running at them from different directions, the firefighters in Balmoral ran out of water.

The New South Wales southern highlands village of about 400 people was hit on Wednesday, five more times on Thursday and endured a horrific “quiet day” on Friday. Then Saturday came.

Conditions were forecast as catastrophic. The focus was on saving lives and as many properties as possible. Stopping the Green Wattle Creek fire wasn’t really an option.

“I held a community meeting on Friday and was very honest about what I thought was going to happen,” says the village Rural Fire Service brigade captain, Brendon O’Connor.

“After that night and the next day, the majority of people were gone. Those that stayed were pretty well set up and defended their homes. I’m so glad they did.”

Balmoral leaves a message for the NSW premier Gladys Berejiklian on Monday morning after the Green Wattle Creek fire burned through the village.

As Saturday morning warmed up, reaching temperatures above 40C, the fire “had a massive run from the west”.

“Everything that was already burning was burning even more, everywhere you looked was burning,” Mr O’Connor said.

“It’s a miracle. The firefighters that were here, they were . . . .” Mr O’Connor stops and takes a deep breath, apologising.

At one point they ran out of water.

“We were desperately trying to get more water into us, desperately calling for more to come in. A member from another brigade spoke to his boss about getting another truck into us really quick.

“That company saved a lot of homes.”

He says again and again, the firefighters stared down something they have never come up against before.

“Praise the Lord,” Mr O’Connor says. “I’m not a very religious person. But the Lord looked after us. Twenty years fighting fires, I’ve never seen anything like this.

“Not when you’re being hit from two flanks at the same time. They just closed in and clashed us in the middle.”

He is disappointed in government, saying no one has come in, save for the upper house MP Lou Amato who lives in the village and who has been “sensational”.

“We really haven’t seen anybody else, other than the volunteers and media,” he says.

On Sunday the NSW premier, Gladys Berejiklian, and the prime minister, Scott Morrison, visited an evacuation centre in Picton, 20km from Balmoral.

“I know [politicans] said in the media they’d come to ground zero, but they were 20km away. No one from the state government has come in offering support, let alone federal,” O’Connor says.

Mr O’Connor says he got the most sleep he’s had in a while on Sunday night - two and a half hours. Like many other Balmoral residents who still have their home, he has opened the doors to a family who are not so lucky.

Asked what people can do to help, Mr O’Connor says they need funding and policy change. He isn’t pointing fingers, but says this could have been prevented if the land was managed better.

“People need to help us as well because funding has been drastically cut across all the services,” he says.

“To the RFS just before the season, to National Parks and Wildlife.”

“I know they want to talk about climate - Australia is a hot country - but to cut such essential and crucial services. It’s like taking away the police or ambulance. They’re essential.

“We’ve got these great resources, with the planes and everything else, but certain policies, like hazard reductions, they have to change.

“I’m not pointing the finger at anyone but it has to change. We’ve been fighting fires since the beginning of winter. Everyone’s exhausted.” - Guardian