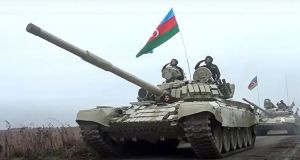 Moscow has warned against any attempt to undermine the peace accord it brokered this month over the disputed region of Nagorno-Karabakh, which has sparked a political crisis in Armenia and caused concern among western powers.

Senior Russian officials visited Armenia’s capital Yerevan and Baku, the capital of Azerbaijan, this weekend to discuss implementation of a deal that ended six weeks of fighting over an Azerbaijani province that has been run by its ethnic Armenian majority since a 1988-94 war.

The agreement has delighted Azerbaijan by cementing its battlefield gains and restoring its control over swathes of Nagorno-Karabakh and surrounding areas, but in Armenia it has fuelled angry demonstrations, widespread calls for the government to resign and an alleged plot to kill prime minister Nikol Pashinyan.

Russia has sent peacekeepers to the region and will monitor the ceasefire with help from Turkey, whose political and military support for Azerbaijan has boosted its influence in the strategic south Caucasus and prompted western capitals to warn Moscow and Ankara not to exclude them from the peace process.

In Yerevan, Russian foreign minister Sergei Lavrov said Armenia’s leaders agreed with Moscow’s view that “attempts to cast doubt on the (peace deal) – not only inside the country but internationally – are unacceptable”.

Without naming which states he had in mind, Mr Lavrov said later on Saturday in Baku: “If they put geopolitical ambitions first there’s nothing we can do about that. But we will strongly rebuff any such attempts and focus on implementing agreements that meet the main interests of the people who live in this region.”

Mr Pashinyan, a former journalist who came to power after peaceful anti-corruption protests in 2018, was seen as a liberal moderniser who could move Armenia towards the west.

In talks with Russian defence minister Sergei Shoigu, however, he thanked Moscow for its “support”, and said he hoped for “deeper co-operation” with Russia, which is Armenia’s main trade partner and energy supplier, and maintains a military base on its territory.

The recent fighting also strained relations between Moscow and Ankara at a time when they back opposing sides in Syria and Libya, but Mr Lavrov said Russia accepted that “Turkey is a real factor in this region”.

“Turkey is our partner in many areas,” he said. “And, of course, sovereign Azerbaijan has the right to choose its own foreign policy partners, just like sovereign Armenia.”

Ankara has called for an end to decades of largely fruitless talks on Nagorno-Karabakh mediated by the so-called Minsk group, which is chaired by France, the United States and Russia.

Paris in particular is concerned about the possible emergence of an alternative peace process for the region, similar to the “Astana” talks that Russia, Turkey and Iran established to discuss the war in Syria.

“We understand the Russians are talking to the Turks regarding a possible formula, which we don’t want, that would replicate the Astana (process) to divide their roles in this sensitive region,” an unnamed French presidential official told international news agencies.

“We can’t have on one side Minsk and the other Astana. At one point the Russians have to make a choice.”