US and Iran-backed Iraqi forces are on outskirts of Isis-held Tal Afar, west of Mosul 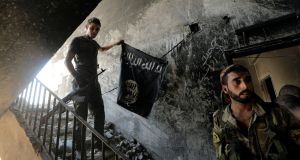 A member of the Syrian Democratic Forces calls his comrades during the fighting with Islamic State fighters in Raqqa, Syria, on August 14th. Photograph: Zohra Bensemra/Reuters

The Baghdad and Damascus governments appear to be co-ordinating their offensives against Islamic State (Isis) with the objective of uprooting the group from western Iraq and eastern Syria. Once this goal is achieved, both Iraqi and Syrian forces can mop up jihadi pockets elsewhere.

Iraqi forces, backed by the US and Iran, have advanced to the outskirts of Islamic State-held Tal Afar, 50km west of Mosul. Tal Afar is a strategically important town where fighting is likely to be fierce as the jihadis are trapped between Baghdad’s forces arriving from Mosul and Shia militiamen who have liberated the nearest crossing on the Iraq-Syria border.

Two US soldiers were killed and five injured by a rocket near Tal Afar, revealing that some of the 5,000 US troops deployed in Iraq are serving in front-line positions during this key battle.

Syrian Democratic Forces – backed by the US and dominated by leftist Kurdish militiamen – continue to fight Isis in the Old City of Raqqa, the group’s headquarters, where an estimated 20,000-25,000 civilians remain trapped.

The Syrian army, supported by Russia and Iran, has more than doubled the territory under its control over the last two months, Russian defence minister Sergei Shoigu announced as troops regained areas held by Isis in eastern districts of Homs province. The objective of the operation is the city of Deir al-Zor, capital of neighbouring Deir al-Zor province.

The army garrison in the city and thousands of civilians have held out against Islamic State since 2014 when it drove rival factions from the oil-rich province and seized half of the capital. The Syrian army is pressing ahead with this offensive although the Syrian Democratic Forces have also declared Deir al-Zor their chief objective once the Raqqa operation has been completed.

The battle for Deir al-Zor, like the fight for Tal Afar, is expected to be brutal because Deir al-Zor province and city constitute Isis’s last major territorial base in Syria and Iraq and have become a refuge for the group’s leaders and fighters escaping Mosul and Raqqa. Once Deir al-Zor falls, the jihadis will have no option but to surrender, scatter, go underground or return home.

Meanwhile, they are fighting back against both pro-government forces and rivals.

In Iraq, Isis claimed an attack on Saturday against soldiers outside the Shia holy city of Karbala, 550km south of Tal Afar and the site of the Shrine of Hussein, grandson of the Prophet Muhammad. This suicide bombing was clearly intended to demonstrate the Sunni group’s ability to strike throughout Iraq and target vulnerable sites venerated by Shia militiamen in the vanguard of the battle against Isis.

In the al-Qaeda-controlled province of Idlib in northwest Syria on Saturday, an Islamic State sleeper cell was blamed for the assassination of seven paramedics from the White Helmets rescue organisation operating in insurgent-held areas.

The high-profile group, financed by the US, UK, Germany and the Netherlands, is a likely target for Isis as its enemies close in.