French protests: ‘We are seeing the first signs of civil war’ 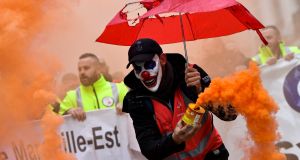 A man wearing a clown mask and waving a smoke bomb takes part in a demonstration against pension overhauls, in Marseille, France. Photograph: Clement Mahoudeau/AFP via Getty Images

Place de la Nation, eastern Paris, 4.30pm. Police vans line the boulevards that extend spoke-like from the large square. Dozens of police officers, African and Arab teenagers and supporters of the protest against president Emmanuel Macron’s pension reform wait for a march from the Gare du Nord to reach this place, its destination.

All eyes are fixed on the Boulevard Voltaire, where flashing lights hail the imminent arrival of the procession. The air is cold and tense, anticipating the violence that often breaks out at the terminus of demonstrations.

But today the violence occurs elsewhere, upstream in the march, at the Place de la République, shrouded in tear gas. About 700 “ultras” pelted police with projectiles and burned a prefabricated construction hut, scooters and benches.

A steel shutter clatters down behind me. Benoit (37) has shut the clothing store where he works early, to avoid vandals and looters, and because he fears police may close the metro. Only two lines, both fully automated, functioned normally on the first day of the open-ended strike against the pension overhaul.

“I totally sympathise with the demonstrators,” says Benoit. Paradoxically, polls show that a majority of French people believe pension reform is necessary, but also support the strikes and protests. “We’re taxed to death here. We pay taxes on taxes. The retirement age has risen three years, just since I started working . . . France is a monarchy masquerading as a democracy.”

So why isn’t he demonstrating? “There’s no point,” Benoit says. “They’ll just get beaten up by the CRS [riot police],” he adds, nodding towards the march.

Lamine, Idrissa and Adame, teenagers in hoodies and runners, speak politely and tell me they too are concerned. “It’s important for us, for later,” says Adame, aged 16.

The cut-off age for the reform is one of its main uncertainties. The government would like to exempt only employees aged 55 and older. Some unions and protesters demand that it apply only to new entrants to the labour force. “It’ll be us, the new entrants,” Adame explains.

Didier and Jean-Pierre, both aged 68, wait for comrades from the neo-communist CGT union to reach them. The former rotary press operator and railway employee retired at age 55.

“Slowly but surely, they’re taking away all our acquis, the acquired rights that our elders fought for,” says Didier. “In 1936 we got paid holidays; later, unemployment benefits. Now they’re trying to take away our pension rights. Macron, stop taking away our acquis!”

Macron wants to shift all France from a defined benefits scheme to a defined contribution scheme, called a points system. “I don’t know what a points pension means,” says Jean-Pierre. “I don’t think Macron knows either. . . I hope we paralyse the country. I don’t give a damn about Christmas, because if Macron keeps at it there’ll be no turkey, nothing to eat. I call him the vulture.” Four police officers stand nearby, shuffling their feet and rubbing gloved hands against the cold. They wear RoboCop vests and shoulder and arm protectors and speak through woollen mufflers. If they can just prevent rioting today, they hope the movement will fizzle.

“Is it true that [interior minister Christophe] Castaner says we can keep our early retirement?” the officers ask. Two leading police unions called on members to strike. Castaner appealed to them to remain on duty, and promised their right to early retirement will not change.

The president’s office, the Élysée, says he is “calm and determined”. Macron wants to merge all 42 pension regimes into one universal system. The survival of special police pensions could be the first stone of the edifice to crumble.

Attac, a group campaigning for a more democratic globalisation, has set up a makeshift booth at a bus shelter. Tables are covered with flasks of coffee, half-empty wine bottles and fliers with titles such as “Little Guide to Fibs about Pension Reform”.

Hubert Labrousse (75), a retired researcher for the Institut Pasteur, joined Attac 15 years ago “because the Communist Party sank and the Socialist Party was no longer socialist”. Labrousse chomps a cigar and wears a top hat, three-piece suit and white scarf, a mockery of a rich man.

He sees this protest as the continuation of the gilets jaunes movement that started in November 2018. “I don’t want a civil war,” he says, “But we’re seeing the first signs: the rise of the far-right, the gap between rich and poor . . .”

A younger man, who identifies himself only as “an anonymous citizen in the resistance”, spills out figures: 78 billionaires in France own more than the rest of the population; 9.3 million people in poverty; €100 billion in annual tax fraud.

The demonstrators march up the boulevard, chanting obscene slogans about Macron and making rude gestures towards the police. The police glare back, but for the time being remain calm.