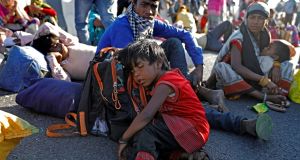 The daughter of a migrant worker sleeps on a highway as they failed to get a bus to return to their village in Delhi on Sunday. Photograph: Adnan Abidi/Reuters

Millions of migrant Indian workers are fleeing possible starvation in cities, many trekking hundreds of kilometres to try to reach the safety of their villages during the countrywide lockdown to control the spread of coronavirus.

Battling hunger and fatigue, the daily wage earners of all ages are choking roads, especially across northern India, as they trudge along in the heat, driven by the prospect of making it home.

Television news channels aired clips of millions of indigent Indians turned into refugees overnight by the lockdown, as their workplaces shut and their employers vanished, in many instances without paying them.

“India is walking home” declared a headline in the Indian Express. It recorded tales of scores on the move, some of them 90 years old, all carrying possessions in tatty plastic or cloth bags. Some carried their children on their shoulders.

Most of the marches have taken place in northern Haryana and Uttar Pradesh states, neighbouring Bihar and eastern Bengal and Odisha states and Rajasthan in the west.

One such walker was a five-year-old boy on a 700km trek from Delhi with his labourer father to their village in central Madhya Pradesh state. He said they had no money and feared starvation.

Another 26-year-old mechanic from Delhi who was on a 250km march to his village in Uttar Pradesh told a news channel that he would “die walking before coronavirus hit him”.

Sociologists said that though cities across India offered economic succour to some 173 million of the country’s migrant poor, social refuge and food was still provided by their villages, and remained the community hub for about 70 per cent of all Indians.

These informal workers comprised the backbone of urban India’s rising economy and were involved in construction projects and employed as mechanics, carpenters, plumbers, domestic help, watchmen and in a myriad other sectors.

Meanwhile, there are also numerous accounts of labourers dying of exhaustion on their journeys across the country and of others being killed on motorways by speeding vehicles as they block roads while looking for rides.

As the crisis worsened over the weekend, the federal and state governments scrambled to arrange busses and other road transport, shelter and food for millions of people.

But the sheer numbers posed a mammoth task, as thousands of people were pressed up against one another, defeating the fundamental aim of social distancing to mitigate the spread of the virus.

Senior officials privately admitted that the three-week lockdown announced by prime minister Narendra Modi was imposed without consulting either state chief ministers or disaster management officials and was fast becoming a humanitarian crisis.

Opposition leaders and analysts criticised Mr Modi for not anticipating the calamity and for failing to handle it effectively.

“The march of migrant workers back home is a sign of policy and administrative failure,” editorialised the Economic Times yesterday. The best course is to halt them wherever they are, create temporary shelters to house and feed them, and to pay them for the lockdown’s duration, it recommended.

In the meantime, sociologists and historians are comparing the “near-biblical” exodus to entire populations fleeing plagues in ancient times.

Others related it to the flight of millions of refugees during India’s partition by the colonial administration in 1947 in which more than two million people died and some 15 million were displaced.

India has 1,071 confirmed coronavirus cases and 29 people have died from the infection. Another 100 have recovered.