Baghdad bombings signal Islamic State is back in business in Iraq 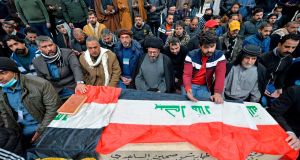 Iraqi mourners pray over the coffin of a victim in the twin suicide bombing in central Baghdad on Thursday which killed 32 and wounded 110. Photograph: Ali Najafi/AFP via Getty Images

The twin suicide bombings in Baghdad on Thursday that killed at least 32 people announced that Islamic State is back in business in Iraq, the country of its birth.

In the first attack by the terror group in three years involving multiple fatalities, it relied on the modus operandi employed widely by al-Qaeda, its parent organisation, during the 2003-2011 US occupation, and subsequently by Islamic State itself.

One bomber detonates his device and, while onlookers rush to the scene to aid the wounded, another carries out a second strike, killing and injuring more people.

Before Thursday’s carnage, Islamic State, also known as Isis, had carried out hundreds of attacks by planting explosive devices on main roads, mounting operations on military checkpoints and army barracks, and assassinating opponents and public figures.

The rate of these operations increased exponentially while the Trump administration reduced the US military presence in Iraq and switched its focus to Iran, and the world became preoccupied with the coronavirus pandemic.

Analysts now expect the terror group to attempt to mount prison breaks, reconstitute its forces and seize territory in areas where the Iraqi army is absent.

Conditions in Iraq mirror the post-US occupation situation. The pro-Iranian Shia fundamentalist government marginalises and persecutes Sunnis, who are attacked by Shia militias, confined to displacement camps and prevented from returning to their home villages.

Many Sunnis had placed their trust in popular protests against the mismanaging, corrupt regime, but demonstrators have failed to secure their demand for secular government. Meanwhile Shia militias kill leading dissidents.

During the 2017-19 campaign to eliminate the terror group in Iraq and Syria, scores of fighters escaped into Syria’s eastern desert. They have regrouped and mounted ambushes on Syrian troops along the Syrian-Iraqi border and attacks on Turkish-occupied enclaves along the Syrian-Turkish frontier.

Thousands of fighters, families and fellow travellers remain in Syrian prisons and camps run by the US-backed Kurdish-dominated Syrian Democratic Forces (SDF), which has also been targeted by Islamic State.

The 2019 US killing of Islamic State commander Abu Bakr al-Baghdadi and succession to the leadership by Abu Ibrahim al-Quraishi have not negatively impacted the movement.

Having survived nearly a decade of civil strife, proxy warfare and sanctions, the Syrian economy has contracted, the value of the currency has plummeted, and 80 per cent of Syrians now live below the poverty level, making young men vulnerable to Islamic State recruitment.

Islamic State – Khorasan (IS-K), the movement’s branch in Afghanistan, has steadily increased attacks in and around Kabul with the aim of scuppering peace talks involving the Taliban, the US and the government. IS-K has spread its tentacles into Pakistan, Kashmir and restive areas in south Asia.

Islamic State fighters who escaped from Syria and Iraq have returned to north Africa where they have mounted strikes against energy targets in Egypt and Libya. Islamic State has established branches in Mozambique, Burkina Faso, Niger, Chad and Mali in sub-Saharan Africa, where it has clashed with other jihadi factions and slain hundreds of civilians.

The Pentagon estimates there are 30,000 insurgents in the Middle East and thousands more in Asia and Africa.