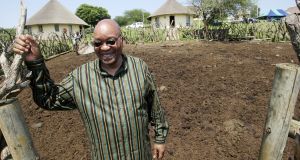 Jacob Zuma at his homestead in Nkandla back in 2007: has said he does not have the money to pay his debts. Photograph: Simphiwe Nkwali/Sunday Times

Former South African president Jacob Zuma is in danger of losing his rural home, which was wrongfully upgraded using millions of euro in taxpayers’ money, because of mounting financial woes linked to his legal battles.

In October it was reported that liquidators were trying to recoup a 7.8 million rand (about €471,000) mortgage the embattled Zuma took out in 2016 on his now infamous Nkandla property, but has failed to service since August last year.

Zuma, who was ousted from power in February 2018 by the ruling African National Congress (ANC) party, took the loan from VBS Bank to repay money he owed state coffers for upgrades done to his retreat in KwaZulu-Natal Province.

In March 2014, former public sector ombudsman Thuli Madonsela found Zuma had unduly benefited from some of the Nkandla upgrades, as the state was only liable for those related to security. Her investigations showed the taxpayer had also paid for renovations that included a swimming pool, cattle enclosure, chicken-run and amphitheatre.

Two years after Madonsela released her findings, South Africa’s constitutional court ruled that Zuma must pay the state back for the non-security-related upgrades, which the national treasury said cost 7.8 million rand.

All told, the government spent more than 245 million rand (about €15 million) upgrading Zuma’s private residence outside of Nkandla, a village in the Zulu tribal lands.

Zuma’s inability to service his VBS debt emerged after the bank became embroiled in a massive corruption scandal in 2018 that saw almost two billion rand looted from it by some of its own directors, senior executives and well-connected politicians.

As a result, the institution is being wound up and the liquidators are trying to retrieve all the money the bank is owed.

According to court papers filed last month, VBS is asking the Pietermaritzburg high court to grant it an order forcing Zuma to repay what he owes on the Nkandla mortgage, or risk losing the property. Zuma is said to be more than 550,000 rand in arrears as of August 2019.

The 77 year old has given notice he will oppose the order, but South Africa’s Business Day newspaper reported in late October that he has missed the court deadline to file his plea to stop VBS from attaching the property.

Were Zuma to be evicted from his rural stronghold, it would be a devastating blow to a man who was one of Africa’s most powerful leaders until early last year, and it would also suggest that his political clout is evaporating as his legal woes intensify.

Aside from the arms-deal-related charges, Zuma’s nine-year presidency and his alleged involvement in a more recent tender fraud corruption scandal is currently under investigation at an inquiry into public sector corruption.

Zuma’s difficult financial predicament is partially, at least, the result of the legal strategy he has been using to avoid going to trial.

Since he first became president in 2009, Zuma has fought his legal battles using the Stalingrad defence – a legal approach to court proceedings in which the accused opposes anything the plaintiff presents and appeals every ruling favourable to them.

The strategy is named after the military tactics Russia used to defend Stalingrad from German invasion in the second World War.

Zuma currently faces 18 fraud‚ racketeering and money-laundering charges linked to a multibillion-rand arms deal dating back to the late 1990s. The legal costs he has incurred to oppose these over 14 years are significant.

Until late last year Zuma was unaffected by the financial implications of this legal battle because of a 2006 agreement he signed with former president Thabo Mbeki that said the state would pay his legal costs related to the 18 charges.

However, at the end of 2018, the North Gauteng high court shredded the deal and ordered the state to recoup all of the state’s money that Zuma spent on his defence, which was estimated at 17 million rand.

The court also declared the state was not liable for any of Zuma’s future legal costs.

The former president has since said he does not have the money to pay this debt, and last month online media outlet News24 reported the department of justice as confirming the state had yet to recoup any of the money he owes the taxpayer.

Nevertheless, it appears that Zuma will stick to his Stalingrad strategy despite his perilous financial situation.

He recently applied to the supreme court of appeal to dismiss a recent high court decision to throw out his bid for a permanent stay of prosecution on the arms deal charges, arguing the latter was biased against him.

If Zuma is unsuccessful here, his last option is to approach the constitutional court to have the charges thrown out. After that, a 2020 trial date will likely be set.