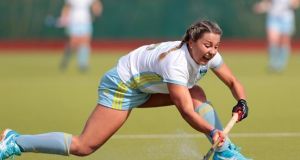 Lena Tice scored Ireland’s goal as they were beaten 4-1 by England in Amsterdam. Photograph: Paul Walsh/Inpho

England produced a composed performance to see off Ireland 4-1, a year to the day since they won the Olympic gold in Rio in their GB guise.

The victory was in contrast to the recent World League meeting between the sides that ended 3-2; England built a strong lead before Lena Tice gave Ireland a lifeline. But two goals either side of the three quarter mark swung the game out of reach of Ireland.

Graham Shaw said of the performance: “Frustrated; we needed a good start to put them under pressure and we didn’t do that the way we would like. To be fair, they are a very good team and have a lot of gold medalists in their team.

“They showed why they are ranked so high and we have a long way to go until we match a team like that. We put a few good phases together but we didn’t manage the phases after our goal well enough and that let them straight back into it.”

England raced out of the blocks and took the lead when Laura Unsworth’s cross, from an incisive pass from Susannah Townsend, took a nasty deflection off the top of Shirley McCay’s cross which deceived Grace O’Flanagan at the near post.

After that, the goalkeeper made some world class saves, the pick of them from Alex Danson’s rasping drive after a Hannah Matthews clearance went straight to her at the top of the circle.

England were on top but were not able to capitalise further and Ireland were well in it. In return, Roisin Upton drew the best of Maddie Hinch with a corner drag-flick while Deirdre Duke’s vicious cross just eluded the dive of Katie Mullan.

After the break, Mullan battled her way through for another chance but her volley flashed well wide. England moved two clear when Ellie Watton nudged in a clever corner move at the left post from Elena Rayer’s disguised shot.

Ireland, though, continued to create and got a lifeline when Lena Tice’s sweep - which looked more like it was destined for a deflector - found its way in at the right post.

But, within a minute, England restored their two-goal gap as Lily Owsley drifted in-field from the right sideline and angled a diagonal pass in behind the Irish defence. Sophie Bray applied the finish at close quarters for 3-1.

Tice saved one off the line, employing her cricket skills to good effect, but Danson dug out a fourth goal with five minutes to go when she picked the ball off O’Flanagan’s pads and flicked in, closing out a 4-1 result.

It adds to the importance of Sunday’s date with Scotland (12.15pm, Irish time). They lost 4-1 to Germany and so it is a vital game for both sides, either in terms of reaching the semi-finals or carrying points into the relegation pool.

“Tomorrow’s a huge game and both Scotland and ourselves know that. We will recover as well as we can so we can put in a performance that we can be proud of.