Kampala Letter: East Coast Boxing Club is a haven for those punching way out of poverty 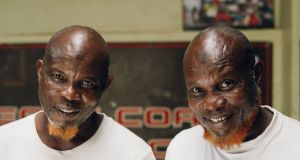 Twins Hassan and Hussein Khalil who set up the East Coast Boxing Club: “We hoped they would learn skills that would lift them up.” Photograph: Fionn McCann Photography

The smell of sweat hits you before you walk through the door. Inside the East Coast Boxing Club in Kampala’s Naguru slum, it’s like an oven. There is little room to move and there’s a danger that a stray fist might come your way at any moment. It’s Saturday morning and the club is full of sparring boys and men.

It is chaos for a few minutes until the bell sounds, and the fighters pull apart and rest. A few minutes later, they’ll all start up again, each time selecting different opponents. It’s a little like being at an overly aggressive barn dance.

The club is a spartan brick bungalow. There are no proper windows, no air-con and little decoration other than a Muhammad Ali poster on the wall, a ragged punchbag in the corner, a mirror and some benches.

The fighters range in age from five to 35. About 40 are gathered here as they are most Saturdays.

It’s not all men. In the midst of the boxers is Shakira Mohammad Mukungu, or “Mama” as the fighters fondly refer to her. She might be the only woman here, but it’s obvious she’s not intimidated.

“They really love and respect me,” she says, chuckling at the idea that it could be any other way.

A trainer, Shakira took up boxing initially to lose weight. This led to her eventually working at the club, initially as a guidance counsellor and masseur, and over the past four years as a coach.

“People in the community now send their daughters to us to learn to box because they were impressed when they saw me here. We now have 24 girls coming here to train, aged from seven years to 20. One of them is with the national team and three others are going to be in the national championships.”

Founded by twins Hassan and Hussein Khalil in 2003 on land next to their home, the boxing club serves, as do clubs like it all over the world, as a haven for those looking to claw their way out of poverty.

“This gym is like a family to me. Hassan brings us together from all different areas and is helping to train us to see boxing as an instrument for positive change,” says Alo Emmanuel, a member of the club for 20 years.

Uganda has taken big steps in tackling poverty in recent years, although the nation still ranks among the worst globally for human development, according to the UN.

The landlocked country is one of the largest refugee-hosting nations in the world with more than 1.4 million, most of whom have fled political instability and violence in neighbouring countries Burundi, the Democratic Republic of the Congo and South Sudan. About 200 asylum seekers arrive daily with an increasing number settling in Kampala’s many slums.

The Khalil brothers, who are in their 60s, both have impressive boxing pedigrees. Hassan estimates he has taken part in more than 170 fights, while Hussein won a gold medal for Kenya at the Commonwealth Games in Brisbane in 1982. The club has also turned out plenty of champions over the past few years, many of whom have made the national team.

“Me and my brother wanted to build something to keep the boys busy around here because they were poor and many weren’t going to school,” explains Hassan. “We hoped they would learn skills that would lift them up,” he adds.

Nige Sutton, an Irishman who has lived in Kampala for more than 30 years, started coming to East Coast Boxing club more than 10 years ago.

“I stupidly agreed to take part in a white collar boxing match and of course didn’t do enough training until a few weeks before the event. I was introduced to Hassan and continued coming long after the event,” he said.

In a previous life, Sutton bought a pub in Drogheda and shipped all the contents to Kampala where he installed it in Bubbles O’Leary bar, which he set up. The marketing consultant, who splits his time between Ireland and Uganda, was impressed by what he saw at East Coast, which was even more spartan then than it is now.

Sutton ended up sponsoring five boxers to go and fight at a championship in neighbouring Tanzania, and paid for some basic equipment for the club.

“I figured that for what you’d spend out on a night on the piss, you could put lights in and buy a few basics such as gloves. When I first arrived, there were all these kids coming all the time who showed so much dedication, but had so few things that they were sharing gum shields and gloves, and boxing in their everyday shoes,” said Sutton.

He hopes to encourage boxing clubs in Ireland to donate their old equipment to clubs in Uganda. To find out more, contact him at nige@limelight.co.ug.