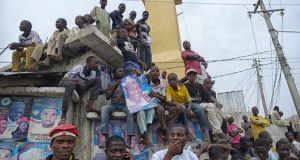 In an unprecedented step, Jonathan phoned Buhari to concede defeat and issued a statement urging his supporters to accept the result, a signal of deepening democracy in Africa’s most populous nation that few had expected.

“President Jonathan was a worthy opponent and I extend the hand of fellowship to him,” Mr Buhari told journalists and supporters to loud applause, wearing a black cap and kaftan.

“We have proven to the world that we are people who have embraced democracy. We have put one-party state behind us.”

The 72-year-old general, who first came to power three decades ago via a military coup, campaigned as a born-again democrat intent on cleaning up the corrupt politics of Africa’s most populous nation.

The margin of victory – Mr Buhari got 15.4 million votes to Mr Jonathan’s 13.3 million – was enough to prevent any challenge. The rules state he must officially hand over on May 29th.

Mr Jonathan’s People’s Democratic Party (PDP) has been in charge since the end of army rule in 1999 but had been losing support due to several oil sector corruption scandals and killings by Islamist militants in the northeast.

“You voted for change and now change has come,” Mr Buhari said. Cities in the largely Muslim north, where Mr Buhari’s core support base lies, erupted in celebration.

Mr Jonathan’s appeal to his supporters that “nobody’s political ambition is worth blood” helped calm their frustrations, reducing the chance of post-election violence that blighted the 2011 poll.

Despite the killing of more than a dozen voters by Boko Haram gunmen – who had pledge to derail the poll – the election was one of the most orderly in the country’s history.

Mr Buhari took power in a 1983 coup only to be thrown out 18 months later by another general. He subsequently embraced democracy, running in several elections and despite losing always bounced back.

He acknowledged the hard work ahead in building bridges. “I asked that we all be circumspect, respectful and peaceful ... We must begin to heal the wounds,” he said.

Oil-rich Nigeria remains a complex ethnic mix of 170 million people speaking more than 500 languages, split between Muslims and Christians. Though they mostly live side by side in peace, many harbour disputes that politicians have often used to stoke violence that has worsened over the years.

As well as the Boko Haram insurgency Mr Buhari must deal with the fallout from a dive in global oil prices in the last eight months which has hammered squeezed state revenues and forced two de facto currency devaluations.