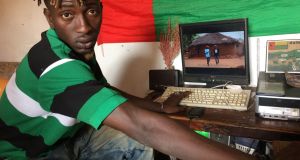 Erickson da Silva (26), aka MC Rey, in his room in Bissau. “We’re in a country where the leaders are out for themselves,” he says. “But we’re looking out for each other.” Photograph: Lorraine Mallinder

For many young men in Mindará, a favela in the heart of Bissau, life revolves round a yellow “Bwinners” machine used to place football bets. They gather on the porch of Bar Sukupira, an empty building notable for its absence of a bar, to discuss the odds. “You can win millions,” says one lad, though he doesn’t look very convinced. “The way we’re sitting, this is the way we spend every day. There’s nothing else to do.”

True, life in a slum in Guinea-Bissau doesn’t seem to offer much beyond the vain hope of a dream windfall. Since independence in 1974, the west African state has struggled to get on its feet, plagued with coups and assassinations. Weak institutions and venal officials made it easy prey for Latin American cocaine cartels seeking alternative routes to Europe in the security crackdown that followed 9/11. In the noughties, it was tagged a “narco-state” – Africa’s first.

It’s normal there’s crime here. We’re in a country where the leaders are out for themselves

Ever since, the country has been locked in that no-hope narrative. But, just across the rocky red square, at Herculino’s, a bright blue establishment where locals share cartons of Festão red wine, Erickson da Silva is in fightback mode. The 26-year-old musician, aka MC Rey, is sick of negative perceptions, not only of his favela, known for high crime rates, but also his country. “It’s normal there’s crime here. We’re in a country where the leaders are out for themselves,” he says. “But we’re looking out for each other.”

‘Fighting for our country’

Da Silva, who is part of rap collective Mindará Na Korson (Portuguese Creole for Mindará in the Heart), is proud of his country’s history. Way before the narcos moved in, Guinea-Bissau fought an 11-year guerrilla war that ended five centuries of Portuguese colonisation.

Led by Amílcar Cabral, one of Africa’s foremost revolutionary thinkers who influenced fellow freedom fighters in Angola and Mozambique, it was a triumph against overwhelming odds. By the end, liberation forces controlled two-thirds of the territory and had set up their own schools and clinics.

It’s an indication of what might have been, had this visionary leader, a gifted poet, not been assassinated a year before independence. The official story is that he was shot dead by a rival militant, though it is widely believed the Portuguese secret police had a hand in it. Eventually, the insurgencies across Lusophone Africa sparked a left-wing military coup that overthrew the authoritarian Estado Novo regime in Lisbon.

It’s quite a legacy. And Mindará Na Korson wants to keep the flame burning.

In his room at the back of Herculino’s, sparsely furnished with a rope for clothes and a computer set against a giant red, yellow and green Bissau-Guinean flag, Da Silva plays some of the collective’s hits. There’s Es Ki Na Dos, which describes how leaders have failed to harness the nation’s natural resources for the benefit of the people. And Kafumban, reminding politicians of the lies they told about providing basic services. It’s a long way from Amílcar Cabral.

But people are getting on with it, policing the streets themselves, trying to raise money for the streetlamps that could help reduce crime rates, searching for sponsors who could help organise the slum into blocks in exchange for commercial space.

Call it community spirit – alive and kicking in a so-called “narco-state”.

Meanwhile, on the capital’s main square, Praça dos Heróis Nacionais, the legacy of a revolution cut down in its prime is still being played out among the political descendants of the old combatants, who are battling for supremacy in Cabral’s African Party for the Independence of Guinea and Cape Verde (PAIGC), the dominant force in the nation’s politics, located next door to the presidential palace.

It’s a battle that has several dividing lines – cultural, ethnic and religious, steered more often than not by naked self-interest.

The government is weak and not able to meet its responsibilities in health and education. We can’t stay silent watching this

“It’s an existential fight. It’s people with kids, houses and expensive lovers in Europe who don’t know how to do anything else but thieve from the state, that are fighting for their survival,” says one foreign diplomat.

He’s unsure to what extent drug money still plays a role. But, in the midst of legislative elections in March, security forces stopped nearly a tonne of cocaine with a market value of around US$25 million (€22 million), the largest seizure in years. Among the six men arrested was an army captain and the special advisor to Niger’s national assembly.

Presidential elections are slated for late this year, a landmark poll for a country in which no elected president has ever completed a full term. President José Mário Vaz, a member of the PAIGC, has succeeded in reining in the army, forestalling the threat of another coup. But, for the past three years, he has been locked in a power struggle with reformist party leader Domingos Simões Pereira, which acquired a new degree of complexity after allies frustrated at his lack of progress in bringing Pereira to heel, stomped off to form a new political party.

In essence, it all comes down to control of the PAIGC, says Amadu Djamanca, executive secretary of think-tank the Observatory of Democracy and Governance. “These politicians are not patriots. They are just selfish,” he says.

As Cabral’s quasi-mythical party lumbers from squabble to squabble, life in Mindará goes on. Alexandre Cristiano da Silva, a 28-year-old rapper, aka Xandy Ross, says Mindará Na Korson is playing the long game. Politicians, who have been able to afford flash cars, while teachers remain unpaid, could do with taking a tip from these musicians, who say they shun expensive clothes and accessories, preferring to invest their money in spreading the word.

“I want to see things improve in this country,” says Da Silva. “The government is weak and not able to meet its responsibilities in health and education. We can’t stay silent watching this.

“I am proud of representing my people.”