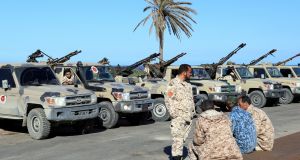 Military vehicles of Misrata forces, under the protection of Tripoli’s forces, are seen in Tajura neighborhood, east of Tripoli. Photograph:Hani Amara/Reuters

The UN mission to Libya (UNSMIL) called on Sunday for a truce for two hours in southern Tripoli, where forces loyal to the country’s rival governments have been clashing, a statement said.

UNSMIL urged a truce between 4pm and 6pm local time (3pm to 5pm) to evacuate wounded, it said, without giving casualty figures.

The US has decided to withdraw Libya-based troops on Sunday as Haftar advance to capital outskirts . The US Africa Command said in a statement that supporting forces had been “temporarily relocated from the country in response to security conditions on the ground.”

Haftar’s advance to the capital has raised the stakes in the country that sits atop Africa’s largest proven reserves of crude. “ The security realities on the ground in Libya are growing increasingly complex and unpredictable,” said US marine corps General Thomas Waldhauser, commander, US Africa Command. “Even with an adjustment of the force, we will continue to remain agile in support of existing US strategy.”

Separately, Mellitah Oil and Gas, a venture between Italy’s Eni and Libya’s state-run National Oil Corp., asked its Tripoli-based staff who live in neighbourhoods “witnessing security tension” not to go to the office, according to a statement on its Facebook page.

Meanwhile, the United Nations is determined to hold Libya’s national conference on possible elections on time despite eastern forces’ advance on the capital Tripoli in an escalation of the conflict, a senior UN envoy said on Saturday.

Haftar’s Libyan National Army (LNA) said on Friday its forces had advanced into the capital’s southern outskirts and taken its former international airport. Its spokesman Ahmed Mismari said 14 LNA troops had been killed so far

The offensive by the LNA, which is allied to a parallel administration based in the main eastern city of Benghazi, intensifies a power struggle that has fractured the oil-producing country since the 2011 overthrow of Muammar Gaddafi.

The United Nations aims to stage a conference in the southwestern town of Ghadames on April 14th-16th to weigh elections as a way out of the country’s prolonged factional anarchy, which has seen Islamist militants establish a toehold in some areas.

Ghassan Salame, the UN special envoy to Libya, said he was striving to prevent the new crisis from getting out of control. “We have worked for one year for this national conference, we won’t give up this political work quickly,” he said.

“We know that holding the conference in this difficult time of escalation and fighting is a difficult matter. But we are determined to hold it on time unless compelling circumstances force us not to,” he told reporters in Tripoli.

“He [Haftar] will find in us only steadfastness and strength from all those are coming from all over the country to defend Libyans’ dream of a civil sovereign state,” he said in a televised speech.

At a G7 meeting in France, German foreign minister Heiko Maas said he and his counterparts had agreed they must exert pressure on those responsible for the upsurge of fighting in Libya, especially Haftar.

Italian foreign minister Enzo Moavero Milanesi said the G7 statement “should be seen as an appeal to General Haftar to consider with a sense of responsibility peaceful solutions for stabilizing Libya under the UN umbrella”.

Haftar told Bogdanov about what he described as efforts to fight terrorists in Libya, including near Tripoli, according to the Russian Foreign Ministry.

The United Nations wants to find agreement on a road map for elections to resolve the protracted instability in Libya, an important oil exporter and transit point for refugees and migrants trekking across the Sahara with the objective of reaching Europe across the Mediterranean Sea to the north.

In Cairo on Saturday, Egyptian foreign minister Sameh Shoukry said the crisis could not be settled by military means, though insecurity in Libya had long been a source of worry.

At a news conference alongside Shoukry, Russian foreign minister Sergei Lavrov said Moscow wanted all political forces in Libya to strike an agreement in support of peace and warned against foreign meddling there.

There were no reports of significant fighting on Saturday.

Haftar’s LNA said on Saturday its positions were attacked in an air strike south of Tripoli but there were no casualties.

Haftar, 75, who casts himself as a foe of Islamist extremism but is viewed by opponents as a new dictator in the mould of Gaddafi, was quoted by Al-Arabiya TV as telling Guterres his offensive would continue until terrorism was defeated.

A former officer in Gaddafi’s army, Haftar enjoys the backing of Egypt and the United Arab Emirates, which see him as a bulwark against Islamists and have supported him militarily, according to UN reports. The UAE, however, joined Western countries in expressing its deep concern about the fighting.

In the past, Haftar has struck deals with armed factions outside Tripoli to advance his forces. But gaining control of Tripoli - the ultimate prize for Haftar’s eastern parallel government - would be far more complicated.

Armed groups allied to the Tripoli government have moved more machinegun-mounted pickup trucks from Misrata to Tripoli to defend it against Haftar’s forces. The city is known for a spirit of resisting “old regime” figures, developed during 2011 when pro-Gaddafi forces besieged it for three months.

The LNA says it has 85,000 men but this includes soldiers paid by the central government that it hopes to inherit. Its elite force, Saiqa (Lightning), numbers some 3,500, while Haftar?s sons also have well-equipped troops, LNA sources say.

In 2014, he assembled former Gaddafi soldiers and in a three-year battle seized Benghazi. This year, he took control of Libya’s south with its oilfields. -Reuters and Bloomberg