Cyril Ramaphosa’s anti-graft strategies seem to be paying off 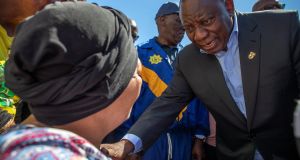 South African president Cyril Ramaphosa: after appointment, he was criticised for not immediately dealing with high-level graft. Photograph: Nic Bothma

South Africa’s new president has managed to keep his promise to tackle government and public sector corruption since coming to power, overcoming the risk of destabilising a ruling African National Congress party riven by factionalism.

After he was appointed in February in the wake of former president Jacob Zuma’s removal as its leader by the ANC, Cyril Ramaphosa was criticised by many people for not immediately dealing with officials and politicians accused of high-level graft.

Indeed, when Ramaphosa reshuffled his cabinet shortly after ascending to the country’s top government job, many of his predecessor’s loyalists retained their executive posts even though allegations of corruption and incompetence hung over them.

Ramaphosa’s decision to retain underperforming ministers such as Nomvula Mokonyane, Bathabile Dlamini and Malusi Gigaba led to speculation that he was indecisive, and doubts arose about his commitment to combating wrongdoing.

However, rather than being hesitant, Ramaphosa appears to have decided that a methodical approach to “turning the tide of corruption” is the best way to balance that task with the competing need to maintain party unity ahead of next year’s general election.

South Africa’s fifth post-apartheid leader managed to win the ANC presidency in December 2017 only by the slimmest of margins, beating his main rival Nkosazana Dlamini Zuma – Zuma’s ex-wife and preferred candidate – by a mere 179 votes, 2,440 to 2,261.

So even though Zuma and his proxy were not in control of the ANC, their support base in the party remained significant enough to be able to undermine Ramaphosa’s control over the movement at a critical juncture in its history.

The ANC will face its most difficult election in the post-apartheid era in 2019, and Ramaphosa knows he needs everyone in the party pulling in the same direction if it is to avoid losing its majority among a disillusioned electorate.

Were Ramaphosa to clear the ANC decks of those believed to be corrupt and incompetent before hard evidence against them has emerged, it would look like a blatant purge of the Zuma faction from the ruling party’s ranks.

This could cripple the ANC’s campaigning efforts in the run-up to an election expected by May, critically undermining its performance at the poll.

With this in mind, Ramaphosa’s decision to establish numerous high-level investigations and inquiries into alleged corruption before taking concrete action increasingly looks like the move of an astute politician.

The most prominent investigation established so far is the Commission of Inquiry into State Capture, Corruption and Fraud in the Public Sector, led by deputy chief justice Raymond Zondo. This inquiry has been tasked with probing allegations that the Gupta business family illegally influenced political decisions to amass billions of euro in fees from illegally awarded government tenders.

While it is still in its early stages, witness evidence given so far has already linked Zuma to the Guptas’ alleged criminal activities.

It has also led to the resignation of finance minister Nhlanhla Nene for lying about private meetings he had with the controversial business family, a decision that set the good governance bar high.

While this is bad news for Zuma, his party loyalists are also under the cosh in many of the other investigations. Last week Ramaphosa fired Tom Moyane, the Zuma-appointed commissioner of the South Africa Revenue Services (Sars), after an inquiry into the institution found he was not fit to hold office.

“We stress that the replacement of Mr Moyane is not a panacea, but only the first necessary measure without which there is no possibility of rectifying the damage that has been done to Sars,” the inquiry’s interim report stated.

The draft report named Gigaba – who last week was also found to have lied under oath to parliament – and Brown as being among 44 individuals and 25 companies suspected of being in cahoots with the Guptas and their associates. The report recommends they should be criminally investigated.

Minister of public enterprises Pravin Gordhan, a long-time Ramaphosa ally, has launched investigations into wrongdoing at other state-run enterprises, including the rail and port company Transnet where chief executive Siyabonga Gama and two others have been suspended over various scandals.

In September, Ramaphosa also announced fresh inquiries into the irregular awarding of tenders at the department of water and sanitation, which was under the watch of minister Nomvula Mokonyane during Zuma’s presidency.

Indeed, rather than destabilising the ANC, Ramaphosa’s corruption-busting activities appear to be increasing his control over the movement, as many of those who would undermine him are now too busy trying to stay out of jail to do so.