Two-thirds of adults believe childcare should be free, survey finds 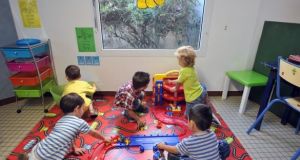 Two-thirds of adults believe childcare should be available free of charge to all children across the State, according to a new survey.

The strongest support for this proposal came from the 25-34 age bracket - those most likely to currently be struggling with childcare costs of young children. There was also significant support from the 18-24 and 35-44 age groups.

The findings are in the 2019 Childcare Barometer, published on Monday by Early Childhood Ireland, an umbrella body for the childcare sector.

Just over half of respondents agreed that parental benefit should be 66 per cent of weekly earnings, as per the European Commission’s recommend rate, rather than the current benefit of €240 per week (set to rise to €245 from the end of March 2019). Some two-thirds of female respondents agreed with this proposal while 53 per cent of men agreed. Nearly eight out of 10 of adults who had children aged two or under supported the 66 per cent rate.

The study finds that 87 per cent of adults surveyed in January of this year believe there should be greater regulation of childminders across the State.

Nearly nine out of 10 adults believe all private childminders should be Garda vetted, have basic first aid skills and undergo other relevant training, research into childcare in Ireland has found.

The strongest support for vetting came from people aged 25-34 followed by the 35-44 age-group. There was a consensus among all socioeconomic backgrounds that greater checks of private childcare providers was needed.

Nearly two-thirds of respondents agreed that parents should only pay an amount towards childcare which is in line with their overall income, marking a 7 per cent increase in support for the issue since last year’s survey.

The research also found more than two-thirds of adults believe that if a childcare worker is qualified as another professional, such as a nurse or teacher, the terms and conditions of their employment contract should reflect this. This finding is in line with the EU recommendation that 60 per cent of the early childhood education workforce be graduate-led by 2025.

Three-quarters of adults agreed that the education of a child under five is as important as the education of children over five. Commissioned by Early Childhood Ireland, the survey was carried out in January through phone interviews with 1,000 adults aged over 18.

Frances Byrne, director of policy and advocacy with Early Childhood Ireland, said the results of the survey underlined the “widespread public support for a progressive childcare system in Ireland”, particularly with regards to extending regulation around Garda vetting. Ms Byrne said the findings should represent a “vital mandate for Government” to continue to invest in and provide supports for the childcare sector.