De-institutionalisation of mental health problems may have exacerbated situation 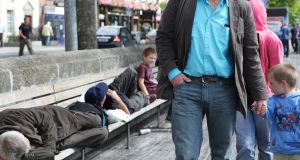 Homeless people with mental health difficulties are often turned away from hospital emergency departments “because they don’t have an address”, according to a report released in Dublin on Thursday.

The report, produced for the Dublin Simon Community and Mental Health Reform, also found homeless people experienced stigma from staff and other patients in emergency units and there was poor follow-on care once they left hospital.

It found homeless people with a dual diagnosis, of mental health difficulties and addiction, had even more difficulty accessing supports.

Homelessness and Mental Health: Voices of Experience highlights the complex and independent factors contributing to the onset and exacerbation of homelessness, as well as to people’s ability to recover.

The most recent homelessness figures show there are 4,972 homeless adults in Ireland, more than 65 per cent of whom are in Dublin. A separate report, Dublin Simon’s Health Snapshot for 2013, showed that more than 70 per cent of the charity’s clients had a diagnosed mental health difficulty, with 22 per cent diagnosed with psychosis or schizophrenia.

The research in Thursday’s report was carried out by Dr Rebecca Murphy and involved discussions with 10 homeless people who had mental health difficulties and with five Dublin Simon Community staff who work with homeless people.

It found there was little understanding of the relationship between trauma, dual diagnosis and homelessness. It said service providers were often not trained or aware of the specific issues homeless people face. And there were also no crisis or crisis outreach mental health services for homeless people.

It called for the development of 24-hour, direct-access, community mental health services for homeless people.

Dr Shari McDaid, director of Mental Health Reform, an umbrella body for mental health organisations, said there had been numerous commitments on delivery of service for homeless people with mental health difficulties, but so far, “there has been very little change on the ground”.

She also said the policy of de-institutionalisation had probably made things worse for those who have mental health difficulties and are homeless.

She said when institutions such as St Brendan’s were open, there was “a door to knock on”.

“That door is now closed,” she said.

“The Government needs to act to ensure that mental health services are fully accessible to everyone, including homeless people.”

Speaking at the launch of the report, the Minister of State for Mental Health, Helen McEntee, said it should inform and challenge work with homeless people.

She said it gave a unique account of users’ experiences and the difficulties and barriers they face.

“There is no point in saying things are perfect because they are not,” she said.

“We in the Government are absolutely committed to improving the lives of our homeless citizens, it is a priority.”

Ms McEntee also said she wanted to continue her work and hoped to be reinstated as minister next week.