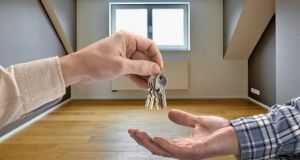 Young parents faced “multiple disadvantages” when looking for rented accommodation “due to a combination of their young age, childcare demands, lack of financial resources, no landlord references and often no work references”

Homeless families headed by young adults are particularly vulnerable and need specific supports yet stakeholders’ attitudes to them can be “unsympathetic” and “problematic”, says a new report.

Published on Thursday by Focus Ireland, “Young Families in the Homeless Crisis: Challenges and Solutions” says between a fifth and a quarter of homeless families are headed by a parents aged 18 to 24 . For about 9 per cent of these, homelessness is their first experience of living outside the family home.

Latest Department of Housing figures show between October 22nd and October 28th, there were 1,709 families with 3,725 children in emergency accommodation.

This report draws on in-depth interviews with 18 young parents whose families include 23 children, and professionals working in local authority housing sections and NGOs.

The interviews found that for the parents “all their decisions and choices were driven by what they understood to be the long-term needs and well-being of their children”.

“The majority... became homeless directly from their family of origin. Some reported being forced to leave the family home, while others made the decision with the welfare of their child(ren) as their central motive.”

Young parents faced “multiple disadvantages” when looking for rented accommodation “due to a combination of their young age, childcare demands, lack of financial resources, no landlord references and often no work references”.

Their youth also meant they were likely to be low on a council housing list.

Where it was safe the original family home was seen as the “ideal housing option”, and some suggested a mediation service could help some young families avoid leaving and becoming homeless, or to return from homelessness.

Most homeless parents “longed” for social or council housing which “they believed could offer them and their family a stable” and long-term home, while the private rented sector was regarded as inaccessible and insecure.

“These families are acutely aware of their own marginalisation from the housing market and fear of returning to homelessness at a later point permeates their reluctance to exit homelessness into the private-rented sector.”

One 24-year-old mother said: “I don’t want to go into a Hap [housing assistance payment] house for two years or five years...and be homeless again”.

A local authority worker said the lack of social housing meant Hap and the private rented sector were the only realistic options for most of the families..

“However, the barriers for young parents accessing Hap can be very challenging. Indeed, awareness of these barriers could contribute to a better understanding [among professionals] of why some young people are declining Hap.

“The problem can be seen not as these families ‘declining’ Hap but rather the Hap scheme not adequately catering to the needs of this young cohort.”

The report says some professionals used “very strong terms” about the young parents, including “immature”; “sense of entitlement” and “demanding”. These terms “reflect a framework of understanding that could be considered problematic”.

Such language “could be considered unsympathetic”, and suggesting the developing needs “of this still maturing cohort may not be fully understood by the system, which may result in less effective supports”.

Among the report’s recommendations are that mediation service be provided to support those who can stay in or return to the family home; that information and supports be specifically targeted at young parents who are homeless or facing homelessness; and that hubs or transitional housing be organised to enable these families build payment histories for bills or rent, and references.