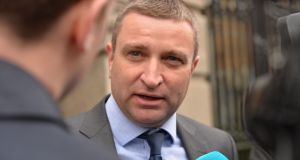 Niall Collins: The Fianna Fáil TD said one Christian Brothers document was “effectively a contract for sale under which boys were sold out of the industrial school into the labour market”. Photograph: Alan Betson

Documents, including contracts that showed children being “effectively sold into slavery”, are at the centre of a dispute between the Christian Brothers and a former industrial school resident who retained the papers for more than 40 years.

Tom Wall, a former resident of St Joseph’s industrial school in Glin, Co Limerick, obtained the documents in 1973, when the Christian Brothers who were leaving Glin asked him to burn files on every resident.

Mr Wall held onto his own file as well as a significant number of files on other residents. In 2015, he donated them to the University of Limerick so they could be maintained and catalogued.

Fianna Fáil TD Niall Collins told the Dáil that the Christian Brothers were now threatening legal action and seeking to recover all the documents from the university. He called on the State to intervene to secure the documents.

Holding up one document in the Dáil, Mr Collins said it was “effectively a contract for sale under which boys were sold out of the industrial school into the labour market”.

He said boys worked for a number of years on farms, but the Christian Brothers were paid by the farmers. “The boys were effectively sold into slavery.”

Mr Collins said many of them were State papers, and he asked Minister for Education Richard Bruton to take possession of the documents and to meet Mr Wall to hear his account.

The TD said he had also written to the chief executive of Tusla but had not yet received a reply.

Mr Bruton said, however, that as far as he could establish his department had no power to seize or “essentially put a freeze on what are private records in this context. I cannot be decisive on that issue because I do not know whether powers reside in another department”.

The Minister said he would get back to Mr Collins.

He also said it would be inappropriate for him to get involved in meetings sides in the dispute when it was potentially being litigated in the courts.