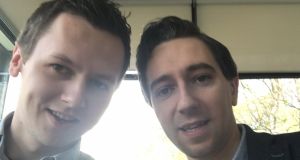 Minister for Health Simon Harris has said his brother Adam’s autism led him to a political career.

“It simply would not have happened otherwise,’’ he said.

He said he was motivated by the absence of awareness and knowledge of autism and the fact that he had to campaign on issues like the provision of special needs classes.

He said Taoiseach Enda Kenny, who was then leading Fine Gael after the party was decimated in the 2002 general election, hard urged him to get involved in politics and make a difference rather than give out and gripe.

Mr Harris (30) and Adam (22) who were interviewed on RTÉ’s Miriam Meets on Sunday, grew up in Greystones, Co Wicklow.

The Minister said he recalled as teenager being frustrated because he could see the pressure his parents were under trying to make sense of Adam’s diagnosis.

He called a public meeting in Greystones, as “an opinionated teenager’’, and about 60 people turned up.

“That was a real turning point for our family because what we found was ‘you are not alone’ ,’’ he said.

Nothing, the Minister said, could compensate for the ability of parents to share stories. He said the meeting grew into an alliance to campaign for facilities.

The cinema in Greystones would be booked exclusively for children suffering from autism.

Adam, who founded the charity As I Am to help those with autism, recalled his early battle with the condition.

“While my language was very good, my co-ordination was very bad, so I wasn’t able to crawl when I should have been able to walk,’’ he said.

As he got older, it became more obvious he had autism.

His mother, Mary, a Montessori teacher, started recording him in playschool so she could show the medical profession what he was experiencing.

“It is really hard to articulate when you don’t know yourself what somebody is actually experiencing,’’ said Adam.

He was diagnosed when he was five years old.

“The key thing with autism is to get the right supports at the right time,’’ he said, adding a person diagnosed later in life can get the necessary supports.

The Minister said his brother’s disability, if it was a disability, was invisible initially because Adam was so bright.

It became obvious when the “meltdowns, temper tantrums or arm-flapping’’, began creating a significant challenge for his parents, the Minister said.