21 Presidential reasons to be cheerful in Ireland 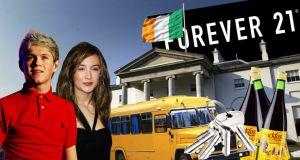 All of these celebrities are 21.

A few of them will meet the requirements to be President of Ireland if we vote to lower the age from 35 to 21 in the referendum on May 22nd.

Of course, you need to be an Irish citizen to be President, although you don’t have to have been born in Ireland. Éamon de Valera became President of Ireland in 1959. He was born in New York City in 1882.

Pop princess Ariana Grande was born in Boca Raton, Florida on June 26th, 1993. Wikipedia says she is of Italian descent, but they have got things wrong before. Both countries start with the letter ‘I’, after all. Don’t abandon hope, Ariana.

Not seduced by the cult of 21-year-old celebrity?

Try the cult of 21-year-old normality.

Club 21 on the capital’s O’Connell Bridge is “the sexiest club in Dublin”. If you don’t want to take our word for it, then take their word for it.

Try Monday madness if you think you are hard (and old) enough. Then move on to Club Poison on Thursday. They have a bar dedicated to Glasgow’s favourite tipple, Buckfast.

Áras an Uachtaráin could have a Bucky bar too. You know what to do.

After you have become President, you might want to dress age-appropriately.

Time to check out Forever 21 in Dublin’s Jervis Centre.

Forever 21 is full of it. Literally.

Think you don’t need another pair of “abstract chevron print culottes”. Think again. You can never have too many. At €21 they are bang on the money – and fit for any Head of State.

In the US, some call Áras an Uachtaráin the “mini White House”, we are told. The US White House has a cinema. We’re not sure whether the new President of Ireland will have one as we don’t seem to be voting on that, but she or he could always bring their own flat-screen TV with them.

Once you have kicked off your runners and opened a cold can, you could watch US heist movie and “Kevin Spacey joint” 21. Mr Spacey also plays Frank Underwood in the US version of House of Cards.

Now (spoiler alert) there’s a president for you.

a) the result of the forthcoming referendum

b) your unelectable nature – you can at least drive a goods vehicle and/or bus with accommodation for up to 16 passengers. That’s the law, and it is on your side.

Three years ago, when you were 18, you got quite a few keys to quite a lot of doors.

Book a holiday or flight.

Apply for a National Age Card.

Get your teeth whitened.

Register to vote in all elections and referenda.

Sit on a jury in court.

Change your name by Deed Poll.

If the electorate say Yes on May 22nd, you will still have to wait three years with your whitened teeth, your lovely tan and a winning Lotto ticket in your pocket, before you can become President. Use those three years wisely.

“I was 21 years when I wrote this song

People ask me ‘when will you grow up to be a man?’

Billy Bragg may have been looking for A New England, but will the electorate deliver A New Ireland on May 22nd?

Some of you will already be pushing prams and will be too busy to stand in any sort of election – however the vote goes.

Star Irish historian Diarmuid Ferriter (to give him his correct title) wrote recently that: “Éamon de Valera referred to the Irish President’s role and powers as requiring ‘the exercise of a wise discretion’.”

Ferriter thinks this is still important.

“Do 21-year-olds exercise ‘wise discretion’? Should they have to? Surely they have other things to be doing?” he asked.

Thanks for the contribution, granddad, but maybe some people actually want to be the titular head of this verdant nation by the time they’re 21. Or maybe they just want to watch the Hollyoaks omnibus.

Well, that pretty much sums it up.