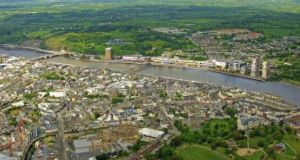 The Government has announced funding of €110 million for Waterford city’s North Quays in the “largest urban regeneration project” in the State.

The project received planning approval from Waterford City and County Council in July and is expected to receive a further €400 million from Saudi Arabian-backed Falcon Real Estate over the coming four years.

It is on an eight-hectare site and includes a 15-storey hotel and conference centre, twin blocks of office space rising to seven storeys, 300 apartments and an open public space.

The Cabinet on Tuesday signed off on €80.6 million for the project from the Urban Regeneration and Development Fund while €30 million has been committed by the Department of Transport, through the National Transport Authority.

The State funding is for infrastructure works as well as the relocation of Plunkett train station east down the quay to become part of a “sustainable transport hub”. The €30 million from the Department of Transport will go towards construction of a sustainable transport bridge across the River Suir, providing access for cyclists, pedestrians and public transport.

The Government estimates the project will create 1,500 new full-time jobs during the construction phase, with private development delivering nearly 2,300 full-time jobs. Works are expected to begin early next year.

It represents“one of the single biggest investments ever” made in the southeast, Minister for Housing, Local Government and Heritage Darragh O’Brien said on Tuesday.

Mr O’Brien said the development is “ currently the largest urban regeneration project” in the country. “For too long Waterford city and the southeast region has suffered from underdevelopment and under-investment”, he added but said the redevelopment would help the region thrive into the future.

Aside from Falcon’s North Quays investment, its director Rob Cass said the company is also intending to move ahead with plans to build a shopping centre across the River Suir in Waterford city as well as some 800 houses on the city’s outskirts.