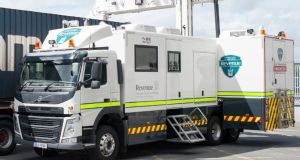 Revenue’s mobile X-ray machine was involved in the discovery of the smuggled cigarettes.

Revenue officials have seized a consignment of 3.45 million smuggled cigarettes at Dublin Port.

The cigarettes were discovered on Monday in 10 large, metal boxes, concealed within timber frames, on a trailer that had arrived on a ship from Rotterdam.

Revenue said the cigarettes, which were branded Winston, have an estimated retail value of €2,415,000, representing a potential loss to the exchequer of €1,890,600.

The consignment was discovered with the aid of Revenue’s mobile X-ray machine.

Revenue said the seizure is part of ongoing operations targeting the shadow economy and the supply and sale of illegal tobacco products.

A spokesman said investigations are ongoing.