Colleagues recall late photographer's irreverence, disrespect for authority and eye for a story 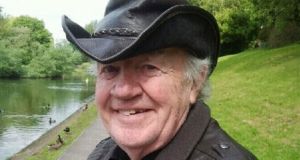 Warm and fond tributes have been paid to Cork photographer Ted McCarthy, who died at the weekend following a long career in photojournalism in which he supplied photographs to The Irish Times for more than 40 years.

Former Irish Times Southern Correspondent Dick Hogan recalled the late Mr McCarthy (80), who died on Sunday after a long illness, with great affection and said he was a great colleague to work with on a story as he brought huge enthusiasm to the job.

“Ted was larger than life. he was full of fun, but above all he was full of enthusiasm for photography, to which he came late in life. His enthusiasm was boundless for the job, right from when he started in the 1970s until he retired in the 2000s,” said Mr Hogan.

“At times he would drive to Dublin with a roll of film and drive back to Cork again just to be sure it got published the next day, and he did quite often with no thought to the cost of the journey or the fact that he couldn’t possibly make money by doing that.”

Mr Hogan added: “He was irreverent in everything he did. He had no respect for titles or authority and he treated everyone as he would be treated himself and he cut through any pomposity, usually with some side quip. It’s sad to hear of his passing.”

Former RTÉ Southern Correspondent Tom McSweeney also paid tribute to Mr McCarthy, with whom he worked for more than 30 years and with whom he used to meet up once a month with fellow retirees Dick Cross of the Irish Independent and Olan O’Brien of RTÉ.

“Ted was a great campaigner in the style of the traditional newspaper man,” said Mr McSweeney. “He had contacts everywhere and he was always very careful about maintaining and protecting his contacts, so he was more than just a photographer – he was a journalist per se, because he always had the story.

“And he was always very friendly with his colleagues in terms of sharing information and co-operating. I would have thought he was one of the very journalists who didn’t seem to have any enemies; he was friends with everyone and everyone seemed to be friends with him.

“A few of us used to meet up with him on the first Friday of every month, and even though he was seriously ill over recent months, he was always very positive and cheerful and as irreverent as ever. I really regard his death as the passing of an era in what I would regard as the old-style journalism.”

Photographer Michael MacSweeney of Provision, who worked closely with Mr McCarthy over many years, also recalled him as a loyal colleague and a great mentor to younger photographers and reporters starting out in journalism.

“I suppose the most striking thing about Ted was his loyalty,” said Mr MacSweeney. “He was cute and knew how to be a press photographer with all that that entailed, but he was 100 per cent loyal and an unbelievable personal friend.

“He was also very kind to a lot of young photographers and reporters starting out in the business. He would take them under his wing and guide them on jobs, and of course he had a healthy disrespect for authorities, which is always a great quality for a news photographer.”

Mr McCarthy, who is survived by his son, Michael, and daughters Margaret, Monica and Karen, as well as his former wife, Bernie, will lie in repose at O’Connor Funeral Home on Coburg Street in Cork on Tuesday before a service at the Island Crematorium in Ringaskiddy on Wednesday.