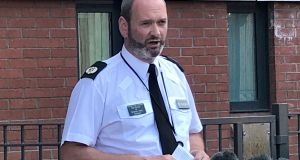 PSNI Assistant Chief Constable Mark McEwan speaks to the media following the the injury of 29 police officers while they facilitated the removal of an internment bonfire in west Belfast. Photograph: Rebecca Black/PA Wire.

The Police Service of Northern Ireland (PSNI) has condemned a “disgraceful attack” on members of the force in Belfast while they facilitated the removal of an internment bonfire at the weekend.

The PSNI said 29 of its members were injured after coming under attack at Distillery Street in west Belfast on Saturday. Petrol bombs, heavy masonry and vehicle parts were used by youths against officers.

“Those injuries range from injuries to limbs, three officers have been hospitalised, and have now been discharged, concussion, head, neck and back injuries,” PSNI assistant chief constable Mark McEwan said.

“The disgraceful attack that we saw on our officers, who were simply doing their job, trying to support our partners in the community and ensuring that we kept people safe.”

He appealed to anyone with information to come forward and said bonfire material had been removed from several sites in recent weeks with “very little disturbance”.

“Communities made it very clear they do not want and do not support internment bonfires in their areas,” he said.

“We will seek to make arrests very soon. Evidence-gathering tactics were deployed yesterday and we will identify people involved and bring them to justice.”

“Our thoughts are with the injured officers. Disgraceful scenes. Important to see prosecutions in due course. A message must be sent that this is not acceptable,” she tweeted.

“My thoughts are with those who have been injured,” she said. “I have spoken to the chief constable to express my concern for his officers and to thank him for PSNI’s role over the weekend in protecting public safety and ensuring the safety of contractors.”

The Police Federation has claimed officers are being used as a “punchbag for a society that has failed to tackle contentious issues”.

“Petrol bombs and chunks of masonry don’t materialise out of thin air. These confrontations were planned,” the group’s chairman Mark Lindsay said.

“Those behind this reckless and irresponsible action had a very clear aim of making officers bear the brunt of their hate.

“What happened posed real risks to the lives of officers. Petrol bombing is a clear attempt to murder or maim officers who were there to uphold the law.”

Mr McEwan said police believe two small bonfires were lit on Saturday night, at Divis and on Distillery Street, which he described as “small in scale”.

“Overall I think we saw a huge reduction in what we had seen in previous years,” he said.

“In terms of the overall operation, the fact that we didn’t see that level of bonfires (as in previous years), has to be welcomed by those communities who have made it clear they did not want bonfires in their areas.”

“We also know that some of the associated issues that come with large uncontrolled bonfires, around young people making themselves vulnerable to various types of harm, we didn’t see that last night and that has to be welcomed.”

Sinn Féin councillor JJ Magee said months of work have been going on behind the scenes, and paid tribute to community workers, youth groups and political representatives for their efforts. He said there had been no major pyres, and just some “pop-up” bonfires where a small amount of material was gathered in a short space of time.

“They are totally unwanted by the community,” he told the Press Association.

Previous years have seen bonfires lit in Belfast to mark the anniversary of internment without trial on August 9th, 1971.

Last year, a standoff developed between young people and police in the New Lodge area of north Belfast over a bonfire. -PA