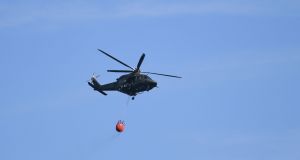 Senior Air Corps officers are still flying air ambulance missions despite the service being cut back over the winter to allow them to carry out management duties.

Lieut Cols are typically management roles within the Air Corps and personnel holding those ranks are not supposed to regularly fly aircraft.

However, due to the ongoing retention crisis in the Defence Forces senior ranks have been forced to regularly fly missions in a number of areas including operating the Emergency Aeromedical Service (EAS) – an air ambulance service based out of Custume Barracks in Athlone – and piloting the Garda helicopters.

It was announced last November the EAS service would not operate for four days a month until March 2020. The break period was needed from “a safety and governance perspective,” the Defence Forces said.

The break period was introduced to allow Lieut Cols to concentrate on management duties while lower ranks were trained to pilot the EAS helicopter.

However pilot shortages mean Lieut Cols must regularly fly missions despite the decreased number of operations, The Irish Times has learned.

The continuing shortage of pilots has caused senior military figures to express concern that the EAS will not be able to resume full operations in March as promised by the Department of Defence.

This would put increased pressure of the Coast Guard and Irish Community Rapid Response (ICRR) helicopter service, which have both been covering the EAS during its downtime.

The Coast Guard has previously warned its search and rescue helicopters cannot match the ambulance service provided by the EAS while the ICRR is facing ongoing funding difficulties.

The EAS has been credited with dramatically reducing the time it takes to transport patients to hospital from rural areas, particularly in the aftermath of car crashes.

In 2018, it responded to 159 serious car crashes, 146 other medical emergencies and 15 urgent transports of children to hospital.

In a statement the Department of Defence confirmed senior officers are continuing to fly EAS missions. Asked if full service will resume in March, it said the matter is being kept under review.

“The training surge is progressing in line with expectations. The matter is under continuous review, with a view to the service resuming in March,” a spokeswoman said.

Lower ranks receive extra allowances to fly EAS missions but these are not paid to Lieut Cols who fly, a point of additional frustration within the senior ranks.

“Using senior Air Corps pilots to conduct operations normally undertaken by junior officers takes them away from their leadership, management, instructional and mentoring roles in the Air Corps, with an associated detrimental impact on governance, and consequent increased organisational risk,” said Conor King, general secretary of the Representative Association of Commissioned Officers (Raco).

Raco has previously warned the retention crisis affecting the Defence Forces has left the EAS “on the brink of collapse.”

Government accused of treating student nurses like ‘slave labour’ 15:59
Gardaí recover €1.8m from money mule bank accounts in major investigation 15:53
National Missing Persons Day: ‘You don’t ever give up hope’ 15:53
Three to remain in jail until they agree to stay away from Roscommon farm – court 15:38
HSE doubts private hospitals will agree new deal for Covid-19 surges 15:21