Ryanair has responded to claims of crews sleeping on the floor of airports, by releasing CCTV footage. The budget carrier claims that a photograph going viral online showing six members of staff curled up on the floor of a crew room was “staged”. 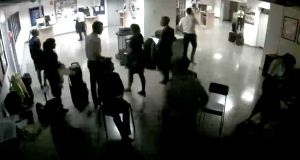 A screen shot from the video released by Ryanair

Ryanair has said a photograph purporting to show crew members sleeping on the floor of a staff lounge was staged, and has released CCTV footage to back up the claim.

The airline posted the footage which was taken in the crew room of Malaga Airport on Saturday night.

It shows seven members of a Ryanair cabin crew lying down on the floor while another member of crew takes photographs of them on a mobile phone.

The incident occurred after four Ryanair crews bound for Portugal were diverted to Malaga Airport because of storms in Portugal. Twenty-eight Ryanair employees spent the night in the crew room at the airport as the airline claimed that all hotels in the Malaga region were booked.

The footage was posted on Ryanair’s Twitter account with the caption: “Ryanair exposes fake photo of cabin crew sleeping in crew room”.

In a statement, Ryanair said the footage showed that the photograph and the claims that staff slept on the floor were “fake news”.

Ryanair suggested the footage exposed the SNPVAC, the Portuguese aviation union, which have been to the forefront in highlighting the original photograph.

Ryanair added that all its offices and crew rooms are equipped for security reasons with CCTV cameras and there were “notifications of same as required by GDPR”.

SNPVAC union official Fernando Gandra, who is a former cabin crew member with Ryanair and who speaks on behalf of the crew involved in the incident, accused the airline of “acting like a five-year-old child” in posting the footage.

He said nobody involved in the taking of the photograph, which went viral across the internet, ever claimed that it was real.

It had been taken, he said, as a protest by Ryanair staff to illustrate the conditions they endured when the airline failed to find hotel rooms for them in Malaga.

Mr Gandra said he wanted to thank Ryanair for proving the point they had set out to prove in the first place.

“By posting the video, Ryanair demonstrated that the crews were stuck in a room with only a few chairs. This completely validates our original point,” he said.

“The crew did it as a protest to demonstrate what kind of conditions they had to endure.”

He described the posted footage as a “PR own-goal” for Ryanair which has provoked a backlash on social media.

“This is Ryanair being Ryanair. What else can we say? Ryanair are incapable of putting their hand up and saying ‘we messed up, we apologise. We will do something to make sure that this does not happen again’,” Mr Gandra added.

“They blamed everybody except themselves. It is childish behaviour. People are realising how childish Ryanair is. We are not talking about a small business here. It’s a multibillionaire company that behaves like a five year old. They don’t seem to be capable of learning from their mistakes.”

The original photograph was posted on a Facebook page Ryanair Must Change and then posted to Twitter by former Ryanair pilot Jim Atkinson.

Mr Atkinson accused the airline of being “knuckleheads” and he also questioned the legality of releasing CCTV footage of staff.

He posted on Twitter in response to the letter: “The fact remains: you stranded four crew in an airport terminal for the night and made no discernible attempt to find them proper lodging or even food and water!

He hoped the crews will sue Ryanair for the invasion of their privacy, but Ryanair denies that there was any breach of privacy.