Page administrator says they are ‘absolutely serious’ about political party 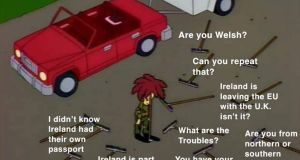 The Irish Simpsons Fans Facebook page frequently shares memes which are based on scenes from the US TV show, but address political and current affairs issues in Ireland, such as the housing crisis and Brexit. Image: Twitter

Over 800 people have signed up in 24 hours as members of a political party established by the administrators of an Irish Facebook page dedicated to US cartoon series The Simpsons.

The Irish Simpsons Fans Facebook page, which has rapidly grown in popularity in recent months, now has over 104,000 fans. Jack Leahy, one of the administrators of the page, said the political party he and the other administrators are founding is “absolutely serious”.

Mr Leahy (27), who is a former deputy president of the Union of Students in Ireland, said the group is “well positioned to speak for a certain demographic and their struggles in employment insecurity, the rent burden – and that’s important to us”.

The page frequently shares memes which are based on scenes from the US TV show, but address political and current affairs issues in Ireland, such as the housing crisis and Brexit. Mr Leahy said the page is run by a group of 13 administrators, whose plan is to write a foundational document for the party, before holding a meeting to approve it and elect an executive team.

The administrators, who are aged between 22 and 31, include civil servants, journalists and students. One of the administrators, Paul Laughran, ran for People Before Profit in Belfast’s Botanic ward in this year’s local elections.

Mr Leahy said the party’s philosophy was “progressive, critical, and a bit direct” and “in favour of an inclusive united Ireland”. The Facebook page has rapidly gained an online audience, with 90,000 active monthly users. The Irish Simpsons Fans Twitter page gains around 1.2 million impressions on its tweets per day. Most of the content on it is generated by members of the community, rather than the administrators themselves.

“Through the content people post in the group, we are already a leading voice on the quality of life enjoyed by young people in Ireland and that’s something we are keen to develop,” he said. “Most people’s experience of politics at the moment is that it’s chaotic and unpredictable. Simpsons memes have become a clarifying language in political conversations among our generation, so why not?”

Mr Leahy said he intended to register the party, as The ISF Party, with the clerk of the Dáil. Parties must have no less than 300 recorded members aged 18 or over in order to be added to the register of political parties.

“In terms of candidates, we know we have huge membership in the major cities on the island. If people want to get on board and support someone in those places, we might be looking at a decent return. If not, we probably still have the platform to make a campaign experience a little different for an underwhelming establishment politician,” he said.

David Farrell, professor of politics and head of the school of politics and international relations at UCD, said the emergence of political movements from outside the mainstream is “part of a wider pattern we are seeing in a number of the world’s democracies”.

“Every democracy is open to that mood, it just needs a particular group to catch the imagination at the wrong moment. Very often these characters are serious, they use humour to attract attention to themselves.”

“There’s not much we can do about it, in our system of representative democracy if someone wants to put themselves forward, it’s incumbent on us to decide whether we vote them in.”