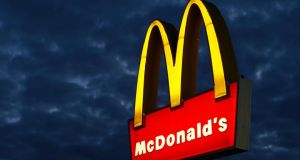 Along with the beef, bacon and cabbage, diners can expect to find a “potato-flaked bun” and baby kale adorned with Ballymaloe relish and Charleville cheese on the McMór burger. Photograph: Mike Blake/Reuters

The fast-food chain McDonald’s has been forced to withdraw the term “artisan” from material promoting a new “Irish” burger which features bacon and cabbage.

Under the rules something can be described as artisan only if it is made in limited quantities by skilled craftspeople. Also, the processing method must not be fully mechanised and should use food grown or produced locally “where seasonally available and practical”.

McDonald’s described its burger as a “tribute to the best produce and finest flavours from across Ireland”. Along with the beef, bacon and cabbage, diners can expect to find a “potato-flaked bun” and baby kale adorned with Ballymaloe relish and Charleville cheese.

Ingredients apart, the FSAI expressed concern about some of the promotional material, which labelled the product as artisan. A spokesman told The Irish Times it would be contacting the company to establish the bona fides of its claims.

In a subsequent statement, McDonald’s said the term artisan “is, as we are now aware, inaccurate, insofar as it is in breach of some of the recently launched, voluntary FSAI guidelines around the usage of the term in the marketing of food. This specific term will no longer be used.”

Garda Adrian Donohoe profile: ‘Big in heart with so much to live for’ 12:56
Aaron Brady found guilty of capital murder of Det Garda Adrian Donohoe 12:40
Covid-19: Restrictions an attempt to prevent State going back to ‘beginning’ 10:37
Sunny spells forecast with high temperatures of 26 degrees 09:02
A new species of dinosaur discovered on the Isle of Wight 08:38