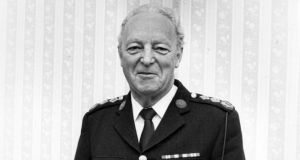 The Smithwick report into the IRA killings of Chief Supt Harry Breen and Supt Bob Buchanan was critical about how the late Garda commissioner Eugene Crowley dealt with warnings of Garda collusion at Dundalk Garda station.

The report not only identified collusion at Dundalk, but raised serious questions about how such concerns were handled at Garda headquarters in Dublin and, in particular, how they were addressed by Mr Crowley.

Judge Peter Smithwick was also disparaging of how both Mr Crowley and then RUC chief constable Sir John Hermon could state shortly after the killings that there was no IRA “mole” in Dundalk station. He was also critical of how the then minister for justice Gerry Collins arrived at the same view.

And, while not referring to Mr Crowley, the judge said that had Garda HQ properly addressed the concerns of a former Garda chief superintendent, the lives of Mr Breen and Mr Buchanan “may have been saved”.

He accepted the evidence of former Garda Chief Supt Tom Curran, whom he described as a man of the “utmost integrity”.

Judge Smithwick referred to Mr Curran’s evidence that in 1988 – between six months and one year before the murder of Mr Buchanan – a man he believed to be a member of the Provisional IRA told him that Supt Buchanan “was going to be shot”.

“This man said to him: ‘[T]here’s a fella crossing the Border there to see you, and he’s going to be shot; he’s on the list to be shot.’ Mr Curran told me that while one can never be sure of the validity of such stories from informants, he treated it as a serious matter, and wrote directly to Crime and Security providing this information,” the judge said.

Mr Curran addressed his report to the Assistant Commissioner, Crime and Security, Garda HQ. The judge said Mr Curran thought Mr Crowley held the position at the time, but that “this may not have been the case”.

Judge Smithwick said the absence of Mr Curran’s report from Garda headquarters files was a matter of serious concern. There was also no evidence “of any note or document” in the Garda or PSNI records to indicate Mr Curran’s information was transferred by the Garda to the RUC for appropriate action to be taken.

“Had this been done, the life of Supt Buchanan, and consequently that of Chief Supt Breen, may have been saved,” he added.

Mr Curran gave evidence that, in the first half of 1987, Mr Buchanan called to him in Monaghan to say that the “RUC had information” and was concerned that Det Sgt Owen Corrigan was “unnecessarily associating with the IRA”.

At the time, Mr Buchanan asked him to convey this concern to the Garda assistant commissioner in charge of crime and security, then Eugene Crowley, which he promised he would do.

Shortly afterwards, he called to see Mr Crowley in Dublin detailing Mr Buchanan’s disquiet, Judge Smithwick reported. The judge said Mr Curran described Mr Crowley’s response as follows: “He was reading a file when I went in, and I told him the purpose of my visit, and I told him about the information that was passed to me by Bob Buchanan and all the bits, hearsay that I had heard about Owen Corrigan. When I finished – he kept looking at the file, but when I was finished – to me, he said, ‘how are things in Monaghan town’?

“So we discussed activities in Monaghan, but he never mentioned anything in relation to the conversation that I went there to tell him. In a very short time I got the opinion that he didn’t want to hear it, so I left.”

Said Judge Smithwick: “The tribunal cannot know what assistant commissioner Crowley was thinking, nor can I know for certain what steps, if any, he took on foot of the information he received. What can be said, however, is that there are no documentary records to indicate that any action was taken by An Garda Síochána to enquire into the suggestion that Det Sgt Corrigan was inappropriately associating with the Provisional IRA.”

Judge Smithwick also raised questions about how, the day after the killings, Sir John Hermon and Mr Crowley separately rejected allegations that an IRA “mole” might have led to the killings.

He said it was “difficult to understand how Mr Crowley could have rejected the allegations in circumstances where on that very day” he appointed assistant commissioner Ned O’Dea to begin an investigation into the “mole” allegation.