Famous stone attracts in the region of 460,000 visitors every year to Co Cork 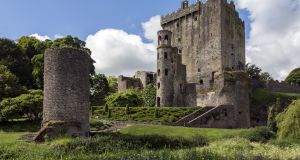 Blarney Castle: A medieval stronghold in Blarney, near Cork, Ireland dates from before 1200.

The kissing of the Blarney Stone has been suspended for the foreseeable future amid fears about the spread of Covid-19 in Ireland.

Owner of Blarney castle, Sir Charles Colthurt, said the suspension was “a necessary step in the current climate.”

“For the first time in its history no one will be kissing the Blarney Stone. We will keep the castle and gardens open for anyone who may want to get some fresh air and experience all the beautiful walks we have available throughout the estate.”

Staff at the castle have vowed to give their visitors the safest experience possible in the midst of concerns about public health.

Local legend has it that visitors who bend over backwards to kiss the stone built into Blarney Castle are rewarded with the “gift of the gab”.

A castle was built on the site in Blarney early in the 13th century, and replaced by the present building in the mid 15th century by the McCarthys. The famous stone, according to one version, is part of the Stone of Sconce which was originally Scottish, and reputedly given to Cormac McCarthy by Robert the Bruce as a gesture of appreciation for his support in the Battle of Bannockburn.

The Blarney angle reportedly comes from Queen Elizabeth I who reportedly experienced difficulty when she tried to make McCarthy sign over his land to her under title. So loquacious was he in avoiding the issue that she declared he was giving her “Blarney” and thus a legend was begun. Or so the story goes.

Blarney Castle is generally in the top 10 most popular fee-paying tourist attraction in the country.

It attracts in the region of 460,000 visitors every year.

Celebrities who have kissed the world famous stone include Winston Churchill and Laurel and Hardy.

Churchill kissed the stone on his visit to Ireland in 1912.