Government negotiations: how the draft deal was done

Sunday’s draft agreement came after blame games and much bickering 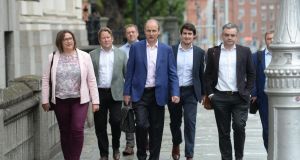 There were times when some of the participants in the long-running negotiations between Fianna Fáil, Fine Gael and the Greens thought the process was going off the rails.

On numerous occasions, the three sides bickered at each other in the talks and in the media for several days. The Greens blamed Fine Gael for cancelling meetings. Fianna Fáil blamed the Greens. Fine Gael complained that the Greens were holding up the talks by refusing to sign off on policy papers that had been agreed by negotiators; while the Greens accused the two bigger parties of trying to push them into a deal without spelling out the detail sufficiently.

One Saturday session two weeks ago, largely dealing with economic issues, did not go well. Fine Gael and Fianna Fáil pressed for agreement on a commitment to reduce the budget deficit in the later years of the government’s term once the cost of dealing with the pandemic had been absorbed; but to the Greens – especially for its finance spokeswoman Neasa Hourigan – this sounded too much like a return to austerity.

The following Saturday, June 6th, after a bruising day, those around the table at another lengthy plenary session stared goggle-eyed at their phones as news filtered through that Catherine Martin had confirmed she would challenge Eamon Ryan for the Green party leadership.

One source expressed astonishment, but also a degree of grudging admiration for Martin, as she proceeded with the talks unfazed while all around her digested the news. Still, as they headed into the final week of talks, many people in Fianna Fáil and Fine Gael thought: That’s it. She’ll never back a deal now.

While Fine Gael and Fianna Fáil found themselves on the same side of many of the arguments about policy, there was still significant tension between the two parties. One senior figure in Fine Gael complained that Fianna Fáil just wanted his party to help entice the Greens in to government at any cost. But it was a “totally different environment” in his party. Lots of people weren’t enthusiastic about entering government at all.

Amid deep pessimism on all sides, the three party leaders held a long and productive meeting on Sunday, June 7th, acknowledging the difficulties and trying to find ways to work around them. One of them told his aides afterwards that they had identified “landing zones” for all the major issues that were still outstanding.

Among the negotiating teams, meanwhile, it became clear that Catherine Martin was going nowhere. Day after day, the Greens hammered away at the talks, slowly, painfully agreeing the policy details of the document that would become the draft programme for government. Martin gave little away in the negotiations, but told her colleagues that she wanted a deal, but only one that could pass a vote of party members, where a two-thirds majority was required.

Progress was slow; a deadline of last Tuesday became the latest of many to pass without agreement. But all the same, there was progress. Texts were being agreed. After some slow and frustrating days, momentum swung towards a deal on Wednesday with broad agreement on how to reach the Greens ambition of reducing carbon emissions by an average of 7 per cent annually by 2030. A deal was getting closer.

But not close enough. As the week went on, Fianna Fáil became more and more frustrated with what the party believed was foot-dragging in the negotiations. Senior party figures and negotiators were divided about who was to blame – the Greens or Fine Gael. But the nagging fear that Taoiseach Leo Varadkar would prefer a general election to a successful conclusion became more pronounced throughout the week, and as the talks dragged on at a glacial pace, Fianna Fáil became more anxious and more impatient. Senior party figures bridled at Fine Gael’s obvious enjoyment that Fianna Fáil was in a tight corner – but despite some sharp private messages sent to Fine Gael, they managed to keep a public lid on their frustrations.

Fianna Fáil had wanted the talks concluded early in the week; then they said it had to be wrapped up by Friday, insisting that ballot papers needed to be sent out to their members by the last post on Friday, but Fine Gael remained impervious to the Fianna Fáil demands. The Friday deadline came and went.

On Saturday, Fine Gael turned up almost an hour late for the morning session; that evening, after a long day, Simon Coveney proposed adjourning the talks until Sunday. By now the Greens were fed up; no way, they said. Let’s get this finished tonight.

The breakthrough in Saturday’s marathon talks session came at about 2 o’clock on Sunday morning, according to sources, when the Greens finally secured their demands on funding for transport: a 2:1 split in favour of public transport over roads and, even before that is calculated, that 10 per cent of the transport capital budget should be allocated to both walking and cycling. The combined 20 per cent works out at a guaranteed €360 million per year in cycling and walking infrastructure.

“We said we couldn’t go any further,” said one Green source of the differences on transport spending. “The transport stuff went right to the end because there were so many moving parts. They [Fianna Fáil and Fine Gael] were very protective of the roads maintenance budget, which is understandable.”

Fine Gael’s Paschal Donohoe, Fianna Fáil’s Barry Cowen and Jack Chambers and Ossian Smyth and Joe O’Brien of the Greens hammered out a deal that cleared the way for the draft programme for government to be sent to the party leaders.

The negotiators eventually finished at about 3.30am, having agreed text on all the remaining outstanding issues, bar those that had been kicked upstairs to the leaders to resolve.

Varadkar was still sticking to an increase in the pension age, an issue that had become more important for Fine Gael as the talks went on as a sort of badge of commitment for fiscal prudence – a contrast, they thought, to Fianna Fáil who were prepared to pay any price for a deal. But Fianna Fáil reminded Varadkar that he had already conceded the principle of postponing the pension age increase during the general election, even producing a report of him promising that cancelling the increase to 67 would be “the first legislation we put through the new Dáil” on February 3rd. In reality, Varadkar was using the pension age as a bargaining chip to get language about possible tax cuts in the future into the document. It remained the sticking point last night.

For the Greens, the negotiating process also helped the parliamentary party bond as a unit. While some knew each other going back decades, others among the 12 party TDs and two Senators returned to Leinster House in the past few months had only a passing acquaintance.

The coronavirus restrictions, with meetings held via video conference, didn’t help the group gel as it would have done normally, but the latter stages of the talks saw the parliamentary party in daily contact at internal preparatory meetings and the negotiating sessions themselves.

For some, it was more than that. Waterford’s Marc Ó Cathasaigh and Limerick City’s Brian Leddin shared accommodation while in Dublin for the talks, as did Senators Pauline O’Reilly and Pippa Hackett. As a party, the Greens have made their bed. They now have to decide whether they want to lie in it.

1 Miriam Lord: Minister for Agriculture tries to get himself out of the manure
2 How fraudsters used lockdown to lure Irish victims into boats and caravans scam
3 Martin criticises ‘over-focus’ on Border poll ahead of Foster meeting
4 Taoiseach rules out united Ireland referendum as ‘divisive’
5 Barry Cowen tells Dáil he is profoundly sorry for ‘stupid’ drink-driving offence
Real news has value SUBSCRIBE